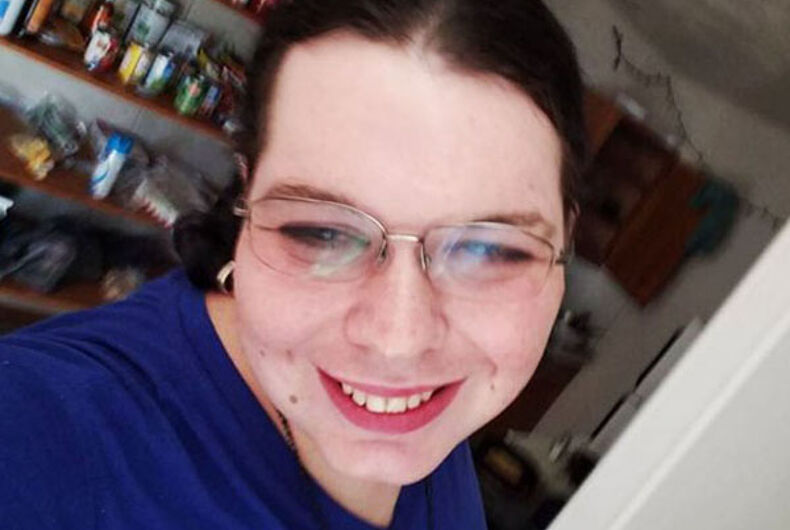 The day before Thanksgiving, Amanda Waite and her 5-year-old son received the worst possible news: her partner, the transgender co-parent of their child, took her own life, and set a note to post on Facebook hours later. But it’s what happened after that post appeared that made the tragic loss of Elizabeth Waite of South Dakota so much more difficult to bear.

A series of comments ranging from just mean to outright transphobic, immature and disrespectful appeared both on Facebook and on a hate site where supporters of president-elect Donald Trump held court. Their anti-transgender rhetoric had haunted Elizabeth (“Lizzy”) Waite in life, and now followed her in death, greatly upsetting her family.

As The Daily Beast reported, the hateful messages mocked and misgendered Waite.

“Lol good riddance,” said one. “I am glad he is gone,”said another. And yet another declared, “#TRANSLIVESDONTMATTER.”

Some of the hate seemed directed at Waite’s reference to Trump in her suicide note:

“Dump Trump. Kill him. Mike Pence too. Goodnight white pride. Steal the hats and destroy them. Best (sic) fascists with a baseball bat.”

Her partner, Amanda, who lived separately from Waite, was not able to gain control of the page by guessing passwords correctly or providing sufficient proof to Facebook that she was dead. And so the trolls kept hammering away, mocking her death, her suicide note, even their son, age 5.

David McClure, Waite’s brother, told The Daily Beast how awful it was to have to read his sister’s “last letter,” let alone those hateful comments.

“I pulled over and read it and cried by the side of the road,” he said. “That day was horrible and those fucking Nazis made it worse.”

Read more about the family’s ordeal from The Daily Beast by clicking here.

Note: the original article contains details of Waite’s death that some may find triggering or inspire suicidal ideation.

‘Moonlight’ and ‘Her Story’ among winners at Gotham Independent Film Awards