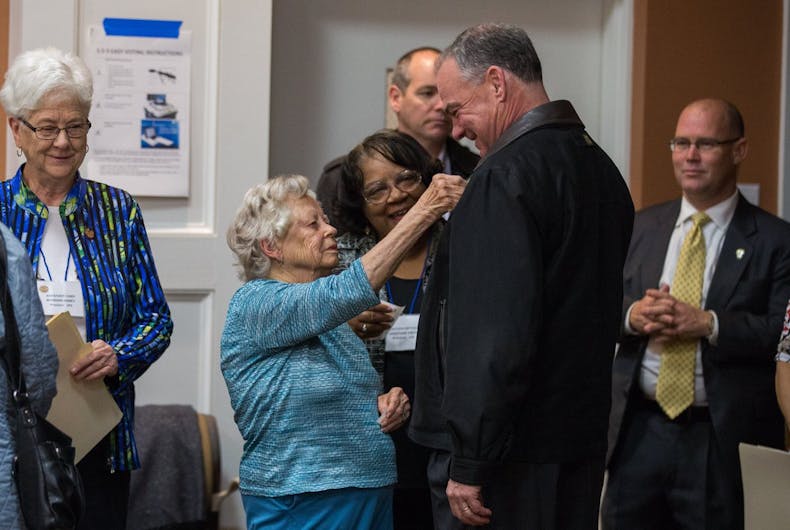 Tim Kaine was hoping he’d get to be first in line at his voting precinct on Election Day in Richmond, Virginia, showing up 15 minutes early. He didn’t quite make it, having to take the second spot behind 99 year-old Minerva Turpin.

Kaine told CNN‘s “New Day” that he “got to my polling place about a quarter until 6,” and that “there was already a line.”

“Well, Ms. Turpin gave me reason to believe that I might win her vote. I voted at a senior center that’s two blocks from my house. She is the president of the residents’ association. So she welcomed me – she was the first voter, I was the second voter. She pinned my ‘you voted’ sticker on after I completed my ballot,” he said.

I wanted to be first at my polling place, but 99-year-old Minerva Turpin beat me to it. Looks like I need to get used to being number two! pic.twitter.com/9YvWOjuKUe

Kaine said they expect a huge turnout and are encouraged by early voting numbers.

“Look, you know, we’re a closely divided nation. We feel really good about the Hillary coalition, the coalition of voters of all income levels, of all races around this country that are turning out in early vote in ways that make us feel good about the likely outcome,” he said.

Hillary Clinton voted today as well, in Chappaqua, New York. She called casting a ballot for herself a “humbling feeling.”

Will a Democrat victory in NC mean the state’s anti-LGBT law will go away?