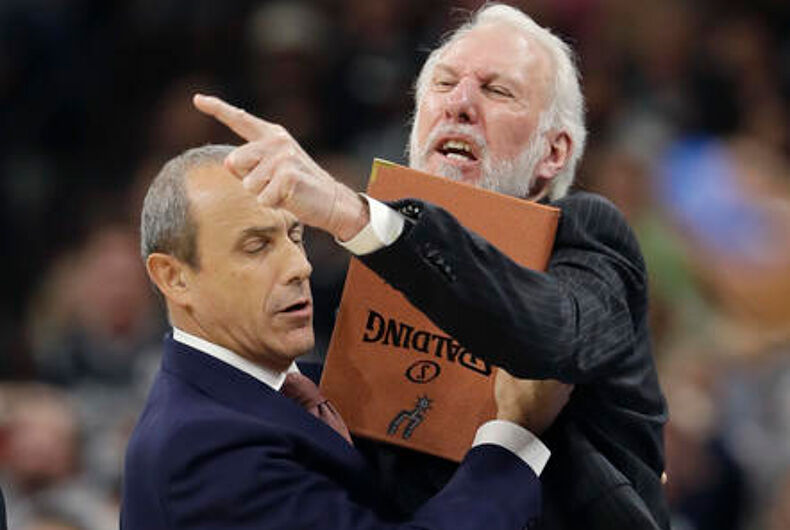 San Antonio Spurs head coach Gregg Popovich, right, is held back by assistant coach Ettore Messina, left, as he argues an official's call during the first half of an NBA basketball game against the Los Angeles Clippers, Saturday, Nov. 5, 2016, in San Antonio. Photo: AP Photo/Eric Gay

“He is in charge of our country,” Popovich said. “That’s disgusting.”

Popovich spoke before his team played Detroit after initially suggesting he needed more time to put his thoughts together. He then vented without being asked another question for the next several minutes, even telling a reporter who tried to interrupt at one point that he wasn’t done talking.

With that, he followed NBA coaches such as Golden State’s Steve Kerr and Detroit’s Stan Van Gundy in lashing out at Trump’s election.

“I’m a rich white guy and I’m sick to my stomach thinking about it,” said Popovich, a graduate of the U.S. Air Force Academy and the next coach of the U.S. Olympic men’s basketball team. “I can’t imagine being a Muslim right now or a woman or an African-American, Hispanic, a handicapped person. How disenfranchised they might feel. For anyone in those groups that voted for him, it’s just beyond my comprehension how they ignore all that.”

Trump lauded the Spurs during a campaign stop last month, but Popovich was upset with Trump’s rhetoric throughout his campaign, and that disdain has not yet subsided.

“Not basically because the Republicans won or anything, but the disgusting tenure and tone and all the comments that have been xenophobic, homophobic, racist, misogynistic,” Popovich said. “I live in that country where half the people ignored all that to elect someone. That’s the scariest part of the whole thing to me.”

Trump said early in his campaign that he would build a wall to keep illegal immigrants out of America because “when Mexico sends its people” they are sending “rapists,” ”bringing crime” and “bringing drugs.” Trump also once proposed a ban on any Muslims entering the country.

Since his election Tuesday night, Trump seemed to strike a more conciliatory tone during his acceptance speech and following his meeting with President Barack Obama. He even suggested in an interview with The Wall Street Journal that he was considering keeping some elements of the Affordable Care Act — after vowing repeatedly throughout his campaign to repeal Obamacare immediately.

“He’s already backing off on immigration, on Obamacare and other things,” Popovich said. “So, was it a big fake? … What gets lost in the process are African-Americans and Hispanics and women and the gay population — not to mention the eighth-grade developmental stage exhibited by him when he made fun of the handicap person. I mean, come on. That’s what a seventh-grade, eighth-grade bully does, and he was elected president of the United States.”

Popovich, who is of Serbian descent, said kids would be punished for the words and behavior Trump exhibited.

“We would have scolded our kids,” Popovich said. “We would have had discussions and talked until we were blue in the face trying to get them to understand these things and he is in charge of our country? That’s disgusting.

“Everybody wants him to be successful. It’s our country, we don’t want it to go down the drain,” Popovich said. “Any reasonable person would come to that conclusion, but it does not take away the fact that he used that fearmongering and all the comments from day one.”

As his remarks ended, Popovich said he was concerned that the U.S. is on the same path as the Roman Empire.

“My final conclusion is, my big fear is, we are Rome,” Popovich said.

Listen to Popovich make his remarks below:

© 2016, Associated Press, All Rights Reserved.
This material may not be published, broadcast, rewritten, or redistributed.
News (USA)
Donald Trump, Election 2020

More than 200 cases of hate-based harassment reported since election