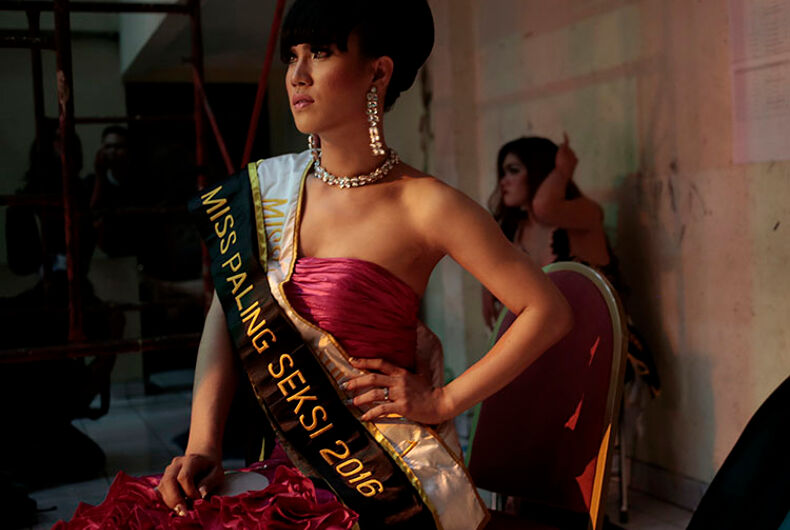 Transgender people and gay activists from across Indonesia have defied a wave of hatred against sexual minorities to crown a Miss Transgender at a national pageant held in absolute secrecy.

A handful of journalists were notified just a few hours in advance of the location of the event, held in the capital, Jakarta, to prevent any attempts by Islamic hard-liners to shut down the pageant. And because of the risk of discovery and violence, organizers asked those present not to post anything on social media during the contest.

Qienabh Tappii, a 28-year-old representing Jakarta who wore a figure-hugging, iridescent metallic gown, triumphed over more than 30 other contestants Friday night to be crowned Miss Waria Indonesia 2016. She will represent Indonesia at an international pageant to be held in Thailand next year. “Waria” is the Indonesian word for transgender, a term for people whose sense of their gender is different from their sex at birth.

“I’m very happy, I feel like I want to cry,” said Tappii, standing next to a 2-meter (6.5-foot) -tall gold and red trophy while cradling a smaller one.

“Tonight is the beginning of my struggle for my rights as a waria,” she said. “I want waria to be accepted, appreciated and understood in our society, and to be equal with other Indonesians. I will work really hard to achieve it.”

The successful staging of the pageant was an important morale boost and self-affirmation for a community that is increasingly under siege.

Indonesia, the world’s most populous Muslim nation, is often held up as practicing a moderate form of Islam. But that reputation for tolerance has been undermined in the past year as the media and religious and political leaders stoked prejudice against lesbian, gay, bisexual and transgender people, framing them as a threat to the nation.

It was in part a backlash against the worldwide advance of LGBTQ rights, and in particular the success of the gay marriage movement in the U.S. and the high-profile battles there over whether transgender people can use the public bathrooms of the gender they identify with.