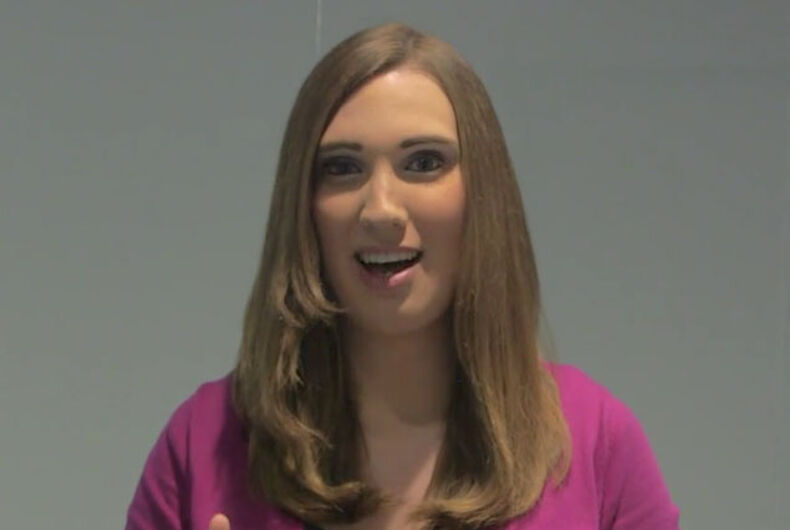 The Human Rights Campaign is marking Transgender Awareness Week with the launch of a coalition of parent-advocates and new anti-bullying efforts aimed at educators. And in both of these big projects, HRC has put forward its stunning and eloquent National Press Secretary, Sarah McBride.

McBride, 26, was the first out transgender American to address a national political convention earlier this year and as the spokeswoman of the nation’s largest LGBTQ rights group, has become its new face to the public, especially since the election of Donald Trump.

“There’s no question a lot of transgender students and their parents woke up Wednesday morning really scared,” McBride told the Associated Press on Sunday, speaking for HRC. “I’m feeling the way a lot of folks are feeling — worried that the heart of this country isn’t big enough to love us, too.”

On HRCs Facebook page, McBride appears in a video aimed at “combatting bullying and continuing the fight toward equality until we are all treated with the dignity and respect we deserve.”

And she was also the host of a Facebook live event for HRC on Monday, launching the Parents for Transgender Equality Council, what the group calls a groundbreaking coalition of the nation’s leading parent-advocates. Their mission is to work together with our elected leaders for equality and fairness for transgender people. According to HRC, the council “will connect, mobilize and amplify the most powerful voices of love, inclusion, and support for transgender equality.” Debi Jackson was one of the parents on hand to talk about their children, as was Rep. Mike Honda of California, whose own granddaughter is transgender.

To find out more about HRC’s new Parents for Transgender Equality Council, click here, and to see the training film addressing bullying of LGBTQ children, click here to watch, “What Can We Do?”

West Virginia gay couple warned: ‘get out of our neighborhood’ because Trump