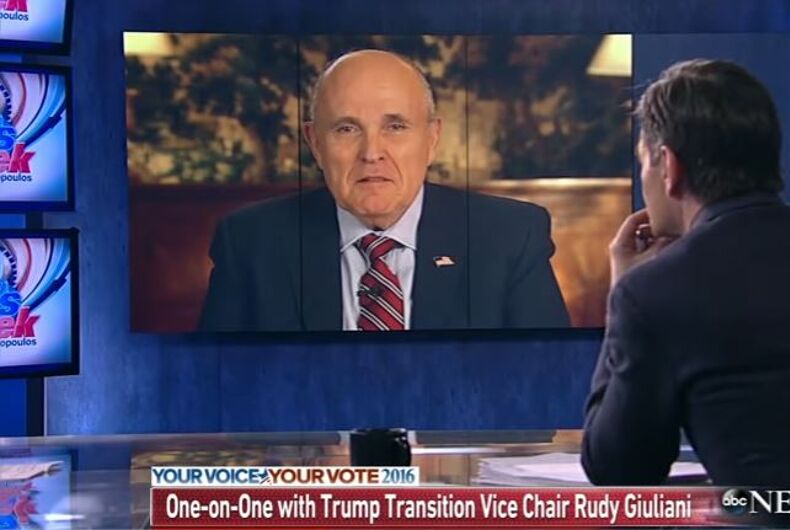 Rudy Giuliani is not concerned that Donald Trump losing the popular vote means the country might not get behind him, saying you have the same mandate “whether it is a close race or it isn’t,” and believes those protesting his win are not legitimate.

Giuliani serves as the Trump transition team vice chair and appeared on ABC News to speak with George Stephanopoulos on Sunday to discuss what the country should expect now that we have a new president-elect.

Stephanopoulos first asked if Giuliani was gunning for a cabinet position, such as Secretary of State or Attorney General, which he avoided directly answering.

“Whatever I want to be I’ll discuss with the president-election, because that’s the best way to do it not to create more rumors,” he said.

Giuliani then debated whether or not it would be a good idea to seek a special prosecutor for Hillary Clinton, suggesting that it is “a tough one,” but that it might make sense to go after her even if it might look “vindictive.”

But he doesn’t think the FBI’s November surprise and unresolved questions about her emails can be blamed for Hillary Clinton losing to Trump, instead arguing that the announcement that Obamacare premiums would be rising as “the bigger hit.”

He also claimed those out in the streets protesting a Donald Trump presidency are “professional protesters,” after first calling them Obama and Clinton supporters.

“All those protesters in all those cities professionals?” Stephanopoulos asked.

“Yes, you gather a certain number of people around you, but they looked, they didn’t look to me like people who were carefully studying political science and were all upset about the ideology of the election,” Giuliani said.

Because apparently you have to have a degree in civics to take issue with a man who used racism, xenophobia, homophobia, sexism, anti-Semitism and transphobia to get into the White House.

Since winning the election, Trump has appointed Ken Blackwell, a senior fellow at the anti-LGBTQ Family Research Council, who believes homosexuality is a changeable lifestyle choice, to head his administration’s domestic policy. He has also appointed and Stephen Bannon, a whiskey soaked leather chair incarnate who used to run Breitbart and is by all appearances not a big fan of Jewish people, or really minorities in general, to be chief strategist and senior counsel.

Watch Giuliani make his case in the video below.