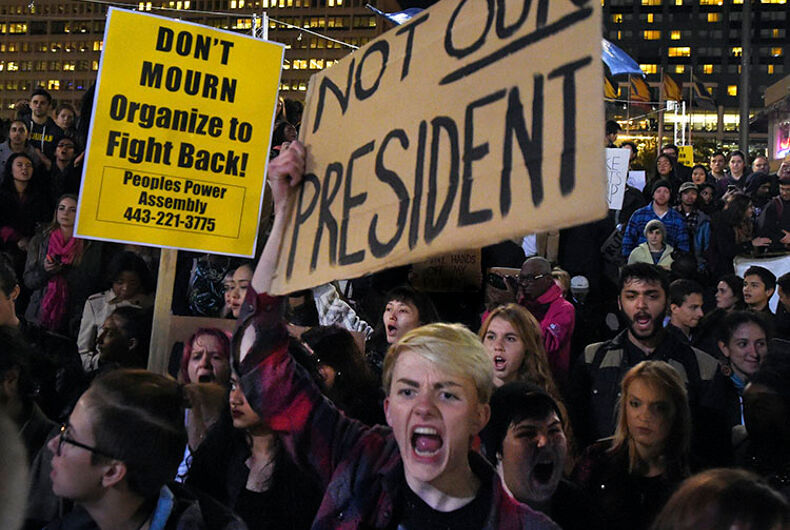 The weekend begins with a fourth night of protests against the election of Donald Trump in cities across the nation, most of which have been peaceful but some have turned violent. Thousands of demonstrators have taken to the streets across the country to declare Trump is “Not My President.”

Police in Portland, Ore., labeled the protest a riot after about 4,000 people converged downtown. Officers fired rubber baton rounds when demonstrators refused orders to disperse. No word on whether anyone was hurt.

Protesters in Denver,  Colo. made their way onto an interstate and brought traffic to a halt for 30 minutes. Highways in Minneapolis and Los Angeles also were targeted by demonstrators in those cities.

High school students in downtown San Francisco called out “not my president” and held signs urging a Trump eviction as they marched, waving rainbow banners and Mexican flags. Bystanders gave them high-fives.

“As a white, queer person, we need unity with people of color, we need to stand up,” Claire Bye told the Associated Press. She’s a 15-year-old sophomore at Academy High School. “I’m fighting for my rights as an LGBTQ person. I’m fighting for the rights of brown people, black people, Muslim people.”

Across the bay in Oakland, protesters got into shoving matches with police. Officers arrested 11 people, after they lit street fires, smashed windows and sprayed graffiti on at least seven businesses.

President-elect Donald Trump decided to respond to the protests Thursday night, in his usual method of choice: Twitter. And he blamed the demonstrations on his usual target: the news media.

Just had a very open and successful presidential election. Now professional protesters, incited by the media, are protesting. Very unfair!

Apparently, either Trump saw the protests in a new light come Friday morning, or someone in the transition team felt he had been a little harsh, so Trump sent another tweet:

Love the fact that the small groups of protesters last night have passion for our great country. We will all come together and be proud!

And within an hour of that tweet, Republican National Committee chairman Reince Priebus, who’s reportedly under consideration for the job of Trump’s chief of staff, blasted protesters on ABC’s Good Morning America and told them to “take a deep breath.”

WATCH: "He talked about everyone coming together, race, religion, gender, that's what Trump believes in." –@Reince https://t.co/TPbRA7tv45

Priebus said the anti-Trump forces just don’t want to accept “that they lost the election.”

“I’m not sure why some of these things are going on,” Priebus told George Stephanopoulos.

“It was the Democrats that accused Donald Trump of not being willing to accept the outcome of the election. Now he won fairly overwhelmingly, although close, but electoral college-wise, pretty clear.”

“Understood — but it’s the other side now that doesn’t want to accept the fact that they lost the election. So look, I think everyone just needs to take a deep breath. Take the weekend. Today’s Veterans Day. Count our blessings, and let’s come back on Monday.”

Priebus told ABC he couldn’t confirm Trump’s allegation that the protests were “incited by the media.”

“I’m sure that the vast majority of people are just very disappointed with the outcome of the election, so I’ll give them that, and I’ll also say I understand the 1st Amendment of the Bill of Rights. But this election is over now. And we have a president-elect who has done everything he can do over the last 48 hours to say, ‘Let’s bring people together.’”