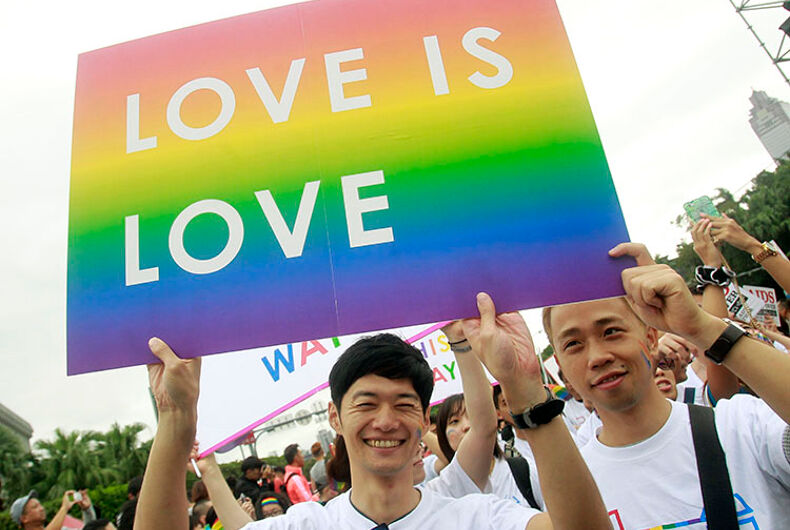 Thousands of Taiwanese protested Thursday outside the island’s legislature both for and against a bill that could make Taiwan the first place in Asia to legalize same-sex marriage.

Organizers estimated that more than 20,000 people protested, carried placards, flew flags and chanted slogans as lawmakers deliberated the bill inside.

Most were affiliated with conservative religious and social groups that chartered buses to bring protesters to the capital, Taipei.

Some demanded an island-wide plebiscite with slogans such as “Marriage and family, let all the people decide,” while speakers argued that same-sex marriage would psychologically harm future generations.

Backers of the bill, separated from the main group by a line of police, waved rainbow flags and chanted their support for gay rights.

Both the ruling and major opposition parties support legalization of same-sex marriage, as do a majority of the public along with President Tsai Ing-wen, Taiwan’s first female head of state.

The bill would change the legal definition of marriage from between “male and female parties” to between “two parties.” Supporters hope to pass it by the end of the current session in December.

Taiwan would join Canada, Colombia, Ireland, the United States and 16 other countries that have legalized same-sex marriage. But it would be a notable exception in Asia and the Middle East where many countries still ban gay sex.

Gays and lesbians in Taiwan have formed an effective lobby in recent years, with an annual Gay Pride march in Taipei last month drawing tens of thousands.

Attacker tells Fla. man: ‘My new president said we can kill all you f—–s now’