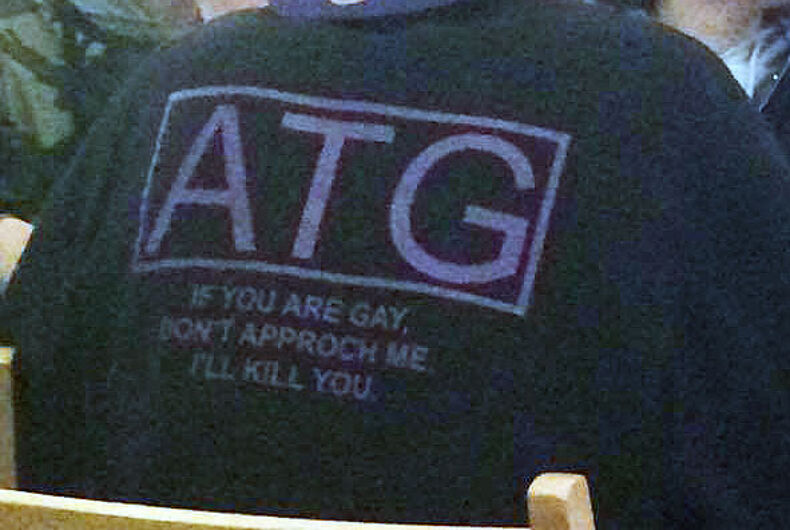 An anitgay shirt worn by an 18-year-old man in Canada’s capital city has sparked a controversy, death threats and now a police investigation.

The back of Julian Clement’s shirt reads “ATG,” which he told CTV stands for “Attitude Towards Gays,” and below the large letters is a hateful message in smaller type, with the word “approach” misspelled:

“If you are gay

A woman sitting near Clement Saturday at Saunder’s Farm in Ottawa snapped a photo of his shirt and posted it on Facebook, declaring it “hate speech:”

The owner of the lodge at Saunders Farm told reporters she was alarmed when customers told her what they saw: “The moment we got wind of it, we absolutely tried to take action,”  owner Angela Grant Sanders. But Clement had left the lodge.

CTV caught up with Clement, who told a reporter in no uncertain terms: “I hate gays for real.” He says he’s received threats for wearing the shirt, but isn’t worried about facing charges.

Still, Ottawa police are investigating both Clement, his shirt and some of the Facebook comments about it. A lawyer contacted by CTV confirmed criminal charges of hate speech are possible.

A friend of Clement’s who also wears that antigay shirt told CTV he didn’t see the problem. “They can have a gay flag or they can have a parade but we can’t have a shirt?” Yan Miller said.

Watch a report from CTV, below:

For antigay hate group leader Tony Perkins, the Supreme Court is on the ballot