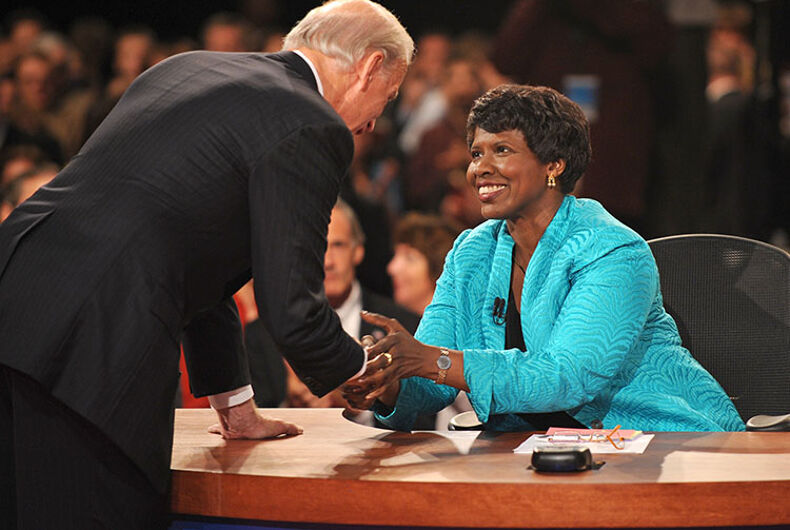 Gwen Ifill, the award-winning television journalist who was managing editor and moderator of Washington Week on PBS, and moderated some of the most contentious political debates in modern history, has died at the age of 61.

Ifill died at a hospice facility following a battle with cancer that lasted several months, according to Sara Just, the executive producer of PBS News-Hour, where Ifill was co-anchor.

“Gwen was a standard bearer for courage, fairness and integrity in an industry going through seismic change,” Just said in a statement.

“She was a mentor to so many across the industry and her professionalism was respected across the political spectrum. She was a journalist’s journalist and set an example for all around her.

“So many people in the audience felt that they knew and adored her. She had a tremendous combination of warmth and authority. She was stopped on the street routinely by people who just wanted to give her a hug and considered her a friend after years of seeing her on tv.

“We will forever miss her terribly.”

Her career began in 1981 at The Baltimore Evening Sun, and eventually she made her way to the Washington Post, The New York Times and NBC News before landing at PBS.

In 2012, conservatives raised hackles when Ifill agreed to be master of ceremonies for Whitman-Walker Health, a clinic in Washington, D.C. that provides essential services to the LGBTQ community. At that April dinner, Whitman-Walker honored Health and Human Services Secretary Kathleen Sebelius with an award, but Ifill was not the presenter. Still, some questioned if this presented a conflict for her as a debate moderator.

Ifill and Judy Woodruff moderated a Democratic debate between Hillary Clinton and Bernie Sanders in February and vice-presidential debates in 2004 and 2008.

She was also the author of “The Breakthrough: Politics and Race in the Age of Obama,” which was published in 2009 when President Barack Obama was inaugurated.