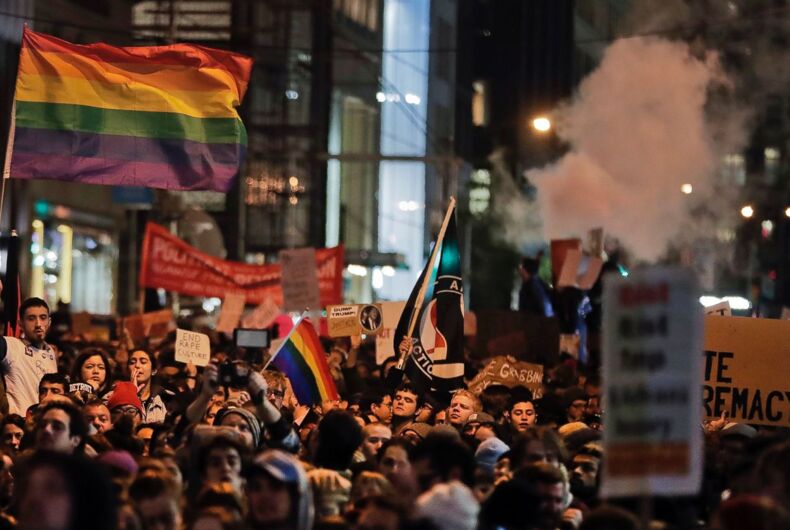 Sen. Chuck Schumer has penned an open letter to the LGBTQ community, encouraging resistance and hope during difficult times now that we have a president-elect Donald Trump.

While Trump attempted to gain the favor of the LGBTQ voting bloc numerous times in his campaign, including giving us a nod in his Republican National Convention speech and holding up an upside down Pride flag at a rally, he also pledged to sign anti-LGBTQ legislation, appointed a homophobe for vice president, and said he would appoint judges like Justice Antonin Scalia.

Since then he has appointed a man who believes people can choose to stop being gay, and another who is an apparent white nationalist who has called progressive women “dykes.” These are not encouraging times for the community, Schumer admits in his Advocate op-ed.

“There are many fellow citizens — the LGBT community, immigrants, communities of color, women, our young people, Democrats and progressives of all stripes — who are profoundly worried about what the future holds,” he writes. “And following everything that was said during this campaign by our now president-elect, it is entirely reasonable to be nervous and even angry. I am not sure what will come next after so many fought so hard for so long to gain the right to say ‘love is love’ no matter what. I am worried about what tomorrow holds and what this new administration may attempt to roll back.”

As hard as it was to imagine witnessing a White House lit up with rainbow colors, it is just as hard now to imagine that we seem to have moved backwards so quickly.

“I will not forget what happened at Stonewall or what happened at Pulse — or any of the countless physical assaults, emotional taunts, and bullying endured by homosexual fellow citizens over the generations. I will not forget North Carolina’s passage of House Bill 2 or the trickle-down of hateful rhetoric inspired by these laws that causes children to take their own lives rather than continue to face the torment of bullies at school. I will not forget the 24 transgender Americans murdered this year alone.

“But I also won’t forget when West Point opened the doors of its historic chapel for its first same-sex wedding after President Obama repealed ‘don’t ask, don’t tell.’ I won’t forget Edie Windsor’s boundless joy when the Supreme Court handed down its decision to make marriage equality the law of the land. And I won’t forget my family, my friends, my colleagues, or the New Yorkers who depend on me to protect their constitutional rights.”

Losing hope and giving in cannot be the answer, because it is only that which ensures failure. He continues:

“Keep fighting; keep working; keep pushing for all LGBT Americans, all Muslim Americans, all Americans with disabilities, all Latino Americans, all African-Americans, all white-black-brown working-class Americans struggling to have a fair shot at the American dream. And keep in the back of your head the words preached by the Rev. Dr. Martin Luther King Jr: ‘The arc of the moral universe is long, but it bends toward justice.'”

Schumer also promises to “all in my power to prevent any backsliding on hard-won rights and to push back against a national discourse that allows for anything less than a full measure of respect for all Americans and would-be Americans.”

Rudy Giuliani, the former mayor of New York City, has condemned protesters as “professionals” and said they should not be in the streets and instead stick to the sidewalks. Giuliani is being talked about for an appointment to Trump’s cabinet, either as secretary of state or attorney general. Trump aides say Giuliani is the leading contender for secretary of state, The New York Times reports.

On 3rd St & Congress: "We are here & we are queer" pic.twitter.com/J4zRmjHo8j

Schumer is in line to take over as leader of the Senate Democrats from Harry Reid, who is retiring. U.S. Capitol police arrested 17 protesters on Monday who oppose Schumer taking over as minority leader, arguing he is too closely tied to the banking and finance industries.