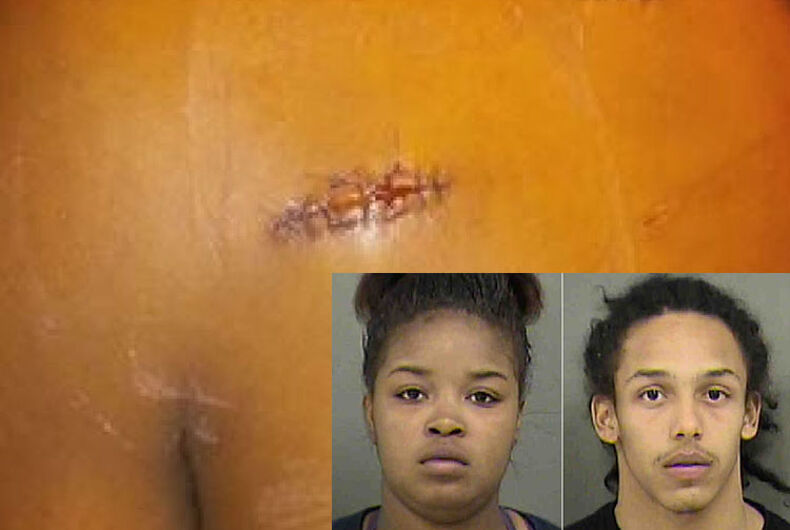 A 24-year old transgender woman is recovering after being chased and attacked with a hatchet in a Charlotte, N.C. park in broad daylight.

Ralayzia Taylor, who moved to the area about a year ago, told WBTV she was out for a stroll near Arbor Glen Park Monday morning when she noticed two teenagers following her. She walked away but then noticed one of them was armed with a hatchet, and started to run.

“They probably just wanted to rob someone that day and then when they found out I was a transgender, it got worse,” said Taylor, who said the pair chased her into a wooded area. Somewhere along the way she lost her cellphone and could not call for help. When they caught up to Taylor, they yelled antigay slurs at her, she said, swung the hatchet at her back and attempted to rob her.

“After that third time of that knife being stabbed in my back, I’m just like, ‘Oh, I don’t think I can do it,'” Taylor told WSOC-TV. “I’m just laying there bloody and I’m like oh my God help me, just bout to die… I didn’t deserve this at all. I’m not a bad person,” said Taylor.

When the attackers finally stopped and ran off, she said she made her way to the street and found passersby to call an ambulance and police. Taylor’s injuries required dozens of stitches.

Police quickly found the suspects and an accomplice, and identified them as Destiny Dagraca, 18, Dajion Tanner, 18, and a 15-year-old boy who is being charged as a juvenile and whose identity is being withheld.

Neither sexual orientation nor gender identity are protected under North Carolina hate crime statutes. However, they are under federal hate crime law. A spokesperson for the FBI told WSOC-TV they are working with the Charlotte-Mecklenburg Police Department to investigate the attack as a hate crime.

Below, watch a video from WSOC-TV which includes an interview with the victim.

West Virginia gay couple warned: ‘get out of our neighborhood’ because Trump