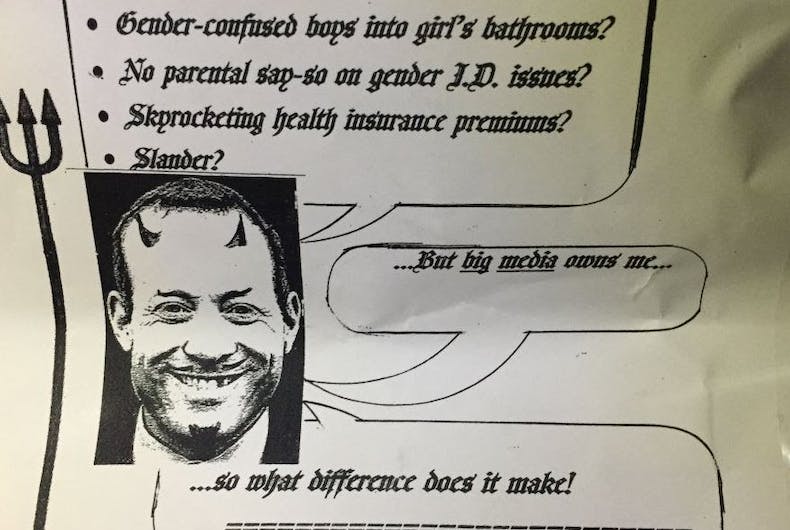 A flier handed out to oppose Democrat candidate Josh Gottheimer has been deemed anti-Semitic.Photo: Gottheimer via Twitter

PARAMUS, N.J. (AP) — A flier portraying a Democratic congressional challenger as the devil is the latest flashpoint in an already bitter contest.

The fliers were circulated at schools and train stations in the New Jersey congressional district that stretches from the suburbs across from New York City to rural towns.

Republican incumbent Rep. Scott Garrett denounced the flier portraying Gottheimer as the devil with horns and a pitchfork. His campaign manager, Sarah Neibart, called it disgusting and said she would never authorize it.

Neibart, who said her relatives fled Nazi-occupied Europe to escape persecution because of their Jewish heritage, also called on Gottheimer to turn the fliers over to authorities to check their origin and whether they were a manufactured “political ploy.”

Gottheimer’s campaign was furious at that response and at “the allegation that we made this whole thing up — which is just absurd.”

“The only thing more shocking than seeing those hate-filled, anti-Semitic flyers is the gall of Scott Garrett to blame Josh for doing it,” Gottheimer campaign manager Alexandra Ball said Thursday in an emailed statement.

The race between Garrett and Gottheimer has turned increasingly negative, with both sides calling one another liars.

Gottheimer, a former Bill Clinton speechwriter and Microsoft executive, called Garrett a bigot on Monday during the only debate in the race. The seven-term incumbent called Gottheimer a liar.

Garrett has been hampered by a controversy over reports last year that he wouldn’t donate to a national Republican committee because it supported gay candidates. The fallout has seen corporate backers including PNC Bank and State Farm pull their support.

Garrett said he supports the right of anyone to run for office but opposes same-sex marriage.

With the district’s rural counties a Garrett stronghold, densely populated Bergen County to the east figures to be where the election is decided.

In a TV ad, Garrett hammers Gottheimer over a lawsuit from a woman who accused him of intimidating her at his Washington, D.C., apartment building. The lawsuit was dismissed, and the Gottheimer campaign calls the ad “categorically false.”

4 openly queer candidates you should know about before Election Day