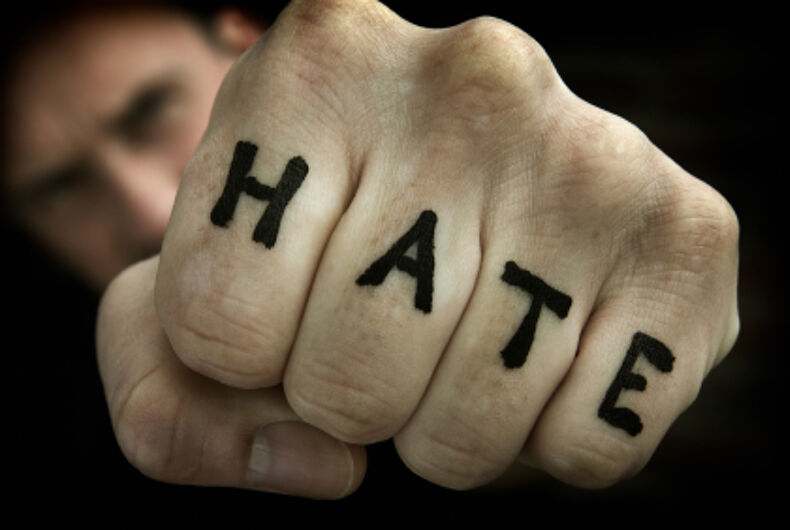 The wave of white supremacist antigay hate that rose up following the election of Donald Trump as president of the U.S. has apparently reached as far away as Australia, in view of a homophobic and racist attack on a gay couple down under.

The Star Observer reports the couple, identified only as Sam and Andrew (which is reportedly not his real name) were in line to get food at a McDonald’s fast food restaurant in the New South Wales town of Newtown Monday, when a clearly intoxicated man started on a pro-Trump rant, just steps away.

“He was saying things like how white men rule now that Trump has won, I was horrified,” Sam told the paper. “Andrew was lovely and very protective of me, he tried to encourage me to stay away from him.

“But I turned around to the guy and said ‘I’m gay – do you have a problem with that?’ and with that he went off.”

The young man then started with a slightly new rant, shouting ‘Trump’s won, straight white men rule,” according to the couple. Friends of the racist antigay Trump supporter then restrained him as he tried to make a violent move toward them, eventually dragging him out of the restaurant.

Andrew and Sam told the newspaper they were shaken by the encounter and decided to take their order to go, and head straight home, but waiting for them as they left the restaurant was that same angry drunk.

“I couldn’t believe it, he’d been waiting outside to pounce on me,” Sam told the Star Observer. “He hit me on the head, and because I’m a pretty big guy, I went down hard – immediately there was blood everywhere. He kept mouthing off, but when he hit my head things went a bit blurry from that point.”

Andrew said he had been distracted by his phone as they exited the McDonald’s. “I looked up and [Sam] was bleeding all over his face,” he said. The man then hit him in the face. “I didn’t fall over, but as I realized what had happened he struck me again with a piece of glass I think, as it cut my skin and I was bleeding.”

Although the man was again dragged away by friends, police caught up with the group not far away. Police obtained surveillance video from the restaurant to aid in their investigation. Both Sam and Andrew praised the McDonald’s and police for how they responded.  And Sam made this statement to the community:

“Don’t just assume it’s 2016 and everything’s okay, because clearly what’s happening in the world is affecting people’s judgement and mentality,” he said. “I think in the LGBTI community we need to check in with each other and make sure we talk more about these things.”