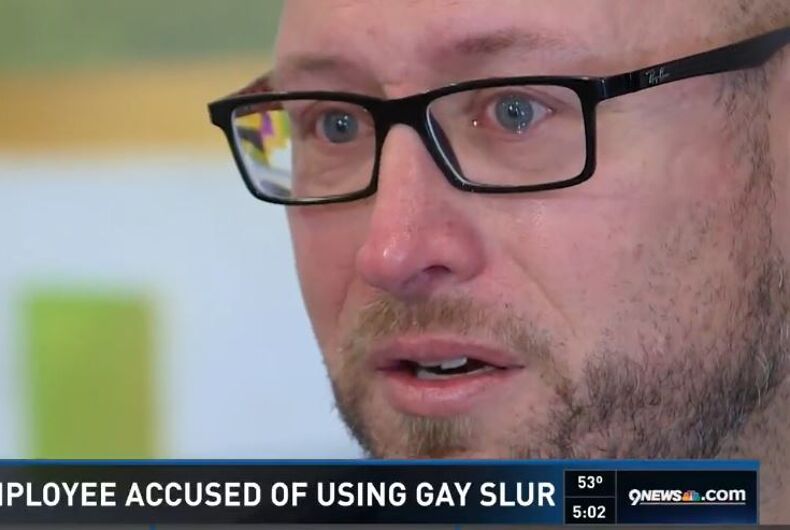 A gay man in Colorado was shopping at a Floor and Decor store with his four-year old son when he was verbally harassed by the store’s manager and a fellow shopper.

James Shawlin says he was looking through boxes of stone slabs to check for cracks after some he previously bought showed damage and had to be returned.

He says he was given permission to look through the boxes by a customer, but the store’s manager came over upset, sent by another employee who had asked Shawlin what he was doing.

“The manager that came over was not too happy,” Shawlin told local NBC affiliate 9 News. “You could tell he was not in a good mood.”

He explained what he was doing and that he had gotten permission from an employee.

“I was a little firm with him, and I just told him, ‘hey, you know, my husband and I spend a lot of money here. We’ve been using you guys for ten years. We have $3,000 worth of stone.'” Shawlin said. “And [the manager] goes, ‘oh, that explains it now. The faggot that voted for Hillary.'”

A customer overheard and said that Trump would make America great again, Shawlin said. He then left the store, followed by the Trump voter, who continued the abuse.

“He basically said, ‘what are these faggots going to do to this child?'” Shawlin said.

“I’m 44, I’ve been out for a while, I grew up in rural Wisconsin, I’ve heard it all,” he added. “But when you have a child that’s so young that doesn’t understand, it’s pretty traumatizing.”

The manager has since been fired for his behavior toward Shawlin.

“The individual at issue is no longer employed by F&D,” the store said in a Facebook comment. “We are an inclusive and diverse company and are committed to treating all customers with courtesy and respect at all times.”

Watch Shawlin talk about the experience in the video below.