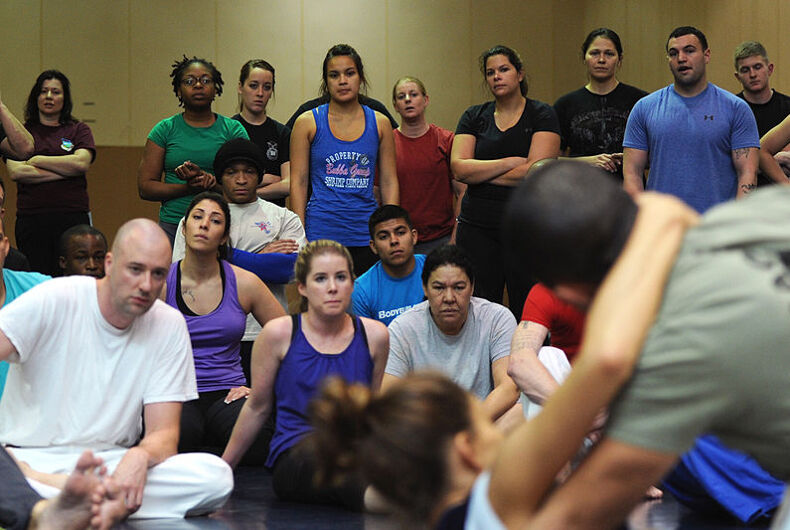 The LGBTQ community, women, and other minority and disenfranchised groups are showing up to self-defense classes with fears of what a Donald Trump win means for their safety.

The Southern Poverty Law Center has logged over 400 hateful incidents of harassment, intimidation, and violence since the election.

New Yorker Lena Afridi was moved to put together a self-defense workshop after Trump became president-elect and had to turn it into a series due to demand after more than 1,000 people RSVP’d, she told The Daily Beast.

Executive director of the Center for Anti-Violence Education in Brooklyn’s Park Slope, Tracy Hobson says interest in classes have never been higher since her martial arts-meets-advocacy organization’s founding 42 years ago.

“We saw another uptick in interest after 9/11…We do think it’s more now than then. The size, the number of calls that we’re getting,” she said.

Patrick Lockton, the director of the Krav Maga Institute in New York, reports a similar trend.

“Traditionally, just before Thanksgiving, it’s a quiet time of year,” he said. “It’s been the busiest November, especially in the last week. It’s been unbelievably busy.”

Many martial-arts and self-defense schools contacted by The Daily Beast told the publication that “women, Muslim Americans, and LGBTQ individuals account for an uncharacteristic portion of the latest barrage.”

Amelia Dorn, director of IMPACT Personal Safety of Colorado in Denver, also reported an increase, which she accounts to women’s fears that misogynists will now feel empowered by the culture that many feel is growing increasingly anti-woman.

In Chicago, Michael Una put together Stronger Together, “a free self-defense and martial arts class for the LGBTQ community and women of all orientations.” Although he had initially only planned one class he had to add three more to accommodate interest, he told Chicagoist.

“The point is not to create an army of queer ninjas to police the city,” he added. “It’s to help people feel they have the strength to do the real work that needs to be done.”

Forteza Fitness, also in Chicago, has started a self-defense course aimed at those concerned about bigotry and intolerance as well.

“Everybody who isn’t white, straight and Christian has been made to feel very scared,” Una said. “We want to change that.”

Look out, red states: the San Francisco Gay Men’s Chorus is coming for you!

Health insurance in limbo in dispute over Louisiana LGBT-rights order