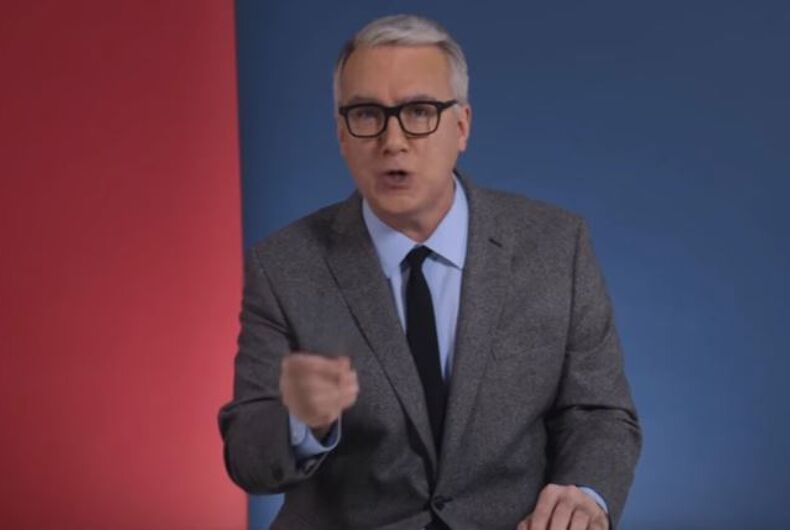 Keith Olbermann explains why we shouldn't give Donald Trump a chance.Photo: YouTube Screenshot

All they are saying is give fascism a chance, and all Keith Olbermann is saying is, uh, yeah, no.

“‘Give him a chance?’ What, in the hope that he will someday grow up enough to be able to see over the top of the Oval Office desk? We do not have time for the White House edition of ‘Celebrity Apprentice’ starring president-election pussy grabber,” Olbermann scoffs.

He warns against normalizing the outcome of this anything but standard election.

Olbermann claims Trump is “not my president” and shows how he has already carried on using his Twitter account as one part pity party, one part bully pulpit, acting anything but presidential, just like when he was on the campaign trail.

Trump’s appointments as president-elect also give us no reason to feel confident in what is coming for this country under his administration, selecting anti-LGBTQ, anti-Semitic, and racist individuals like Ken Blackwell, Stephen Bannon, and Sen. Jeff Sessions. Meanwhile, one of his possible Supreme Court picks once wrote in defense of Lawrence v. Texas, arguing that the Constitution doesn’t protect gay rights and that non-heterosexual sex posed a threat to the public.

Olbermann calls for the country to not accept but resist what Trump will attempt to do in the White House, with the power of the House and the Senate behind him. He volunteers himself to lead, admitting he is aware of the presumptuousness and arrogance of doing so, since he does not believe any “Democratic or liberal politician has yet stepped forward out of the morass of Politics, Inc. to take on the responsibility of the resistance.”

He added that he would gladly hand that position off to anyone more qualified than himself willing to step up.

“I will even acquiesce to a President Pence, just get this man out of here!” Olbermann says. He calls Trump profoundly self-destructive and that it is our “sacred duty” to help him get to the inevitable end of that road.

Watch Olbermann sound off in the video below.

Kaine says he won’t run for president in 2020, will stand up to Trump