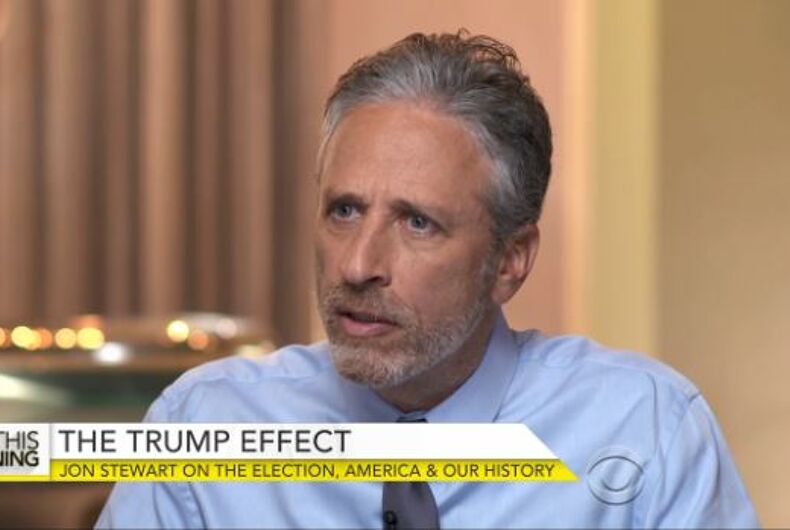 Jon Stewart is worried about the state of our country, but perhaps not as worried as you may think. He sat down with Charlie Rose on “CBS This Morning” to talk about his reactions to the 2016 election and what we might expect now that we have a president-elect Donald Trump.

“Here’s what I would honestly say. I don’t believe we are a fundamentally different country today than we were two weeks ago,” Stewart told Rose. “The same country with all its grace and flaws, and volatility, and insecurity, and strength, and resilience exists today as existed two weeks ago. The same country that elected Donald Trump elected Barack Obama. I feel badly for the people for whom this election will mean more uncertainly and insecurity. But I also feel like this fight has never been easy. And the ultimate irony of this election is the cynical strategy of the Republicans, which is: ‘Our position as government doesn’t work. We’re going to make sure…that it doesn’t work.'”

“I feel badly for the people for whom this election will mean more uncertainty and insecurity.” — Jon Stewart tells @CharlieRose pic.twitter.com/7niarHKw2Q

“But they’re not draining the swamp. McConnell and Ryan, those guys are the swamp. And what they decided to do was, ‘I’m going to make sure government doesn’t work and then I’m going to use its lack of working as evidence of it,'” Stewart said. “Donald Trump is a reaction not just to Democrats, to Republicans…[he is a] repudiation of Republicans.”

That doesn’t mean they won’t take advantage, nonetheless. Stewart notes that “they will reap the benefit of his victory, in all of their cynicism…I will guarantee you Republicans are going to come to Jesus now about the power of government,” Stewart said.

Stewart also lends perspective to those worried about Stephen Bannon, an anti-Semite, being appointed by Trump as chief strategist.

“I would rather have this conversation openly and honestly than in dog whistles,” he said. “You know, somebody was saying, ‘There might be an anti-Semite that’s working in the White House!’ And it’s like, have you listened to the Nixon tapes? Forget about advising the president, the president. Have you read LBJ? Do you know our history?”

He knows that it is not “natural” to fight against our worst, most primal instincts, but notes that it is that fight that has helped get us as far as we have gotten as a species and as a country.

“Natural is tribal. We’re fighting against thousands of years of human behavior and history to create something that no one’s ever — that’s what’s exceptional about America and that’s what’s, like, this ain’t easy,” Stewart said. “It’s an incredible thing.”

Watch Stewart’s full reaction to the election of Donald Trump in the video below.