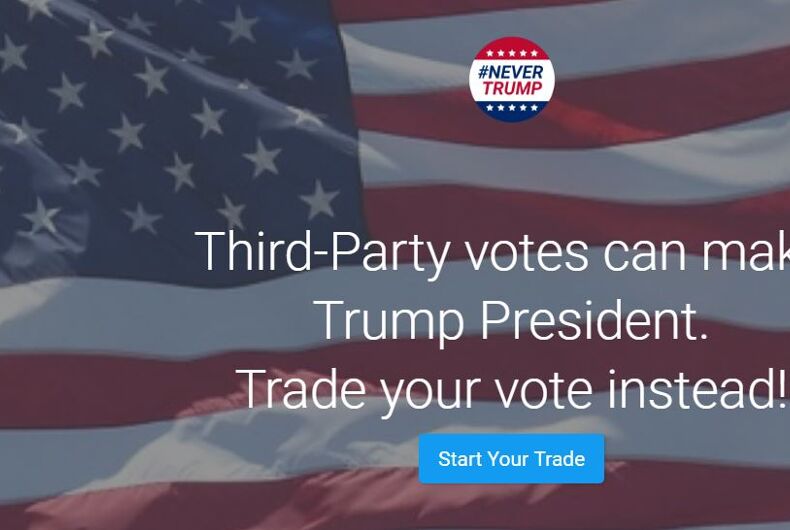 Those looking to support Libertarian Gary Johnson or Green Party candidate Jill Stein in the upcoming presidential election but also want to help defeat Donald Trump are turning to an app called #NeverTrump and a website called TrumpTraders.org to vote swap with Hillary Clinton backers.

Clinton supporter and Silicon Valley-based entrepreneur Amit Kumar came up with #NeverTrump last month after feeling discouraged that his vote in the solidly blue state of California wouldn’t mean much.

A lifelong Republican and onetime adviser to the Bush administration, John Stubbs is dismayed at what his party has become and decided to launch the TrumpTraders.org website, which is similar to #NeverTrump.

“Over time, my feelings toward Trump evolved from amusement to frustration to deep concern to horror,” he told Vox. “I started becoming dismayed with people who were against Trump but didn’t want to participate. They’d say, ‘I live in California! My vote doesn’t matter!’ That’s the same thing I heard from my friends in London before Brexit.”

The sites were shut down after attorney generals in five states sent threat letters. One of the vote trading sites, VoteSwap2000.com, brought suit before the Ninth Circuit Court of Appeals and the resulting case, Porter v. Bowen, established vote trading as “clearly protected by the First Amendment.”

“Vote trading is simply people talking about how they are going to cast their vote — how to form the more effective coalition to accomplish mutual purposes,” Raskin said. “That’s what a political party is! If vote trading is illegal, then political parties are illegal.”

“Vote trading is just people deciding how they’re going to vote, based on forming a strategic political alliance,” he added. “In some sense, it is the principal activity of Democracy.”

Still, some Trump supporters are crying foul, claiming this is another example of what he has been complaining about, that the system and the election is rigged against him.