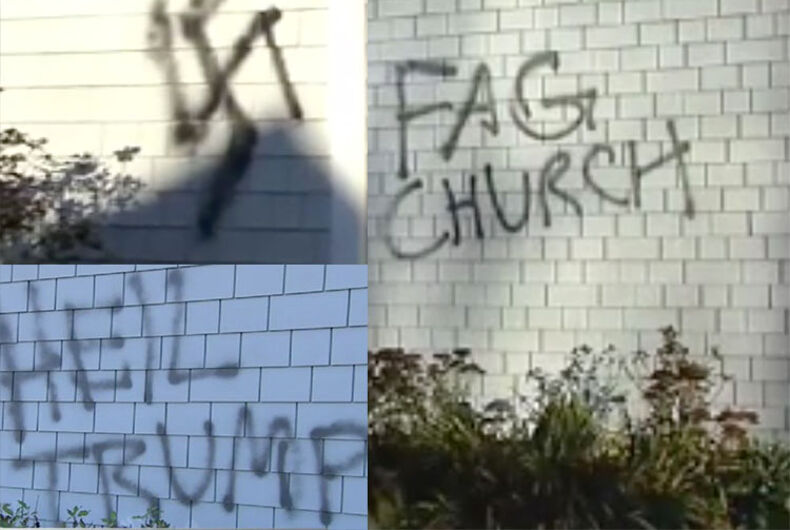 The sheriff’s department in Brown County, Indiana is investigating antigay, Nazi and pro-Donald Trump graffiti discovered at an Episcopal church before services on Sunday, reports WTHR-TV.

A swastika was spray-painted in black on one gray-shingled wall, “Heil Trump” on another and on a third: “Fag Church.” It’s the first case of vandalism in the church’s 60-year history.

Church leaders are turning the other cheek in response. Rather than remove the offensive graffiti, members of St. David’s say they are holding off, hoping that a good discussion can come from the hateful message.

“I’d like it to be a symbol of hope that there’s a place for you, there’s a place to be welcomed,” Rev. Kelsey Hutto told WTHR. “Love conquers all hate,”said Hutto. “And that that is our response, is to be joyful and to be loving.”

“We’re all created equal and we are all brothers and sisters in Christ and a hug is better than hate,” Gene Niednagel, the church rector’s warden.

St. David’s has hosted at least one same-sex wedding and is a member of the Episcopal Church which accepts members who are LGBTQ.

Watch a report from WTHR-TV below.