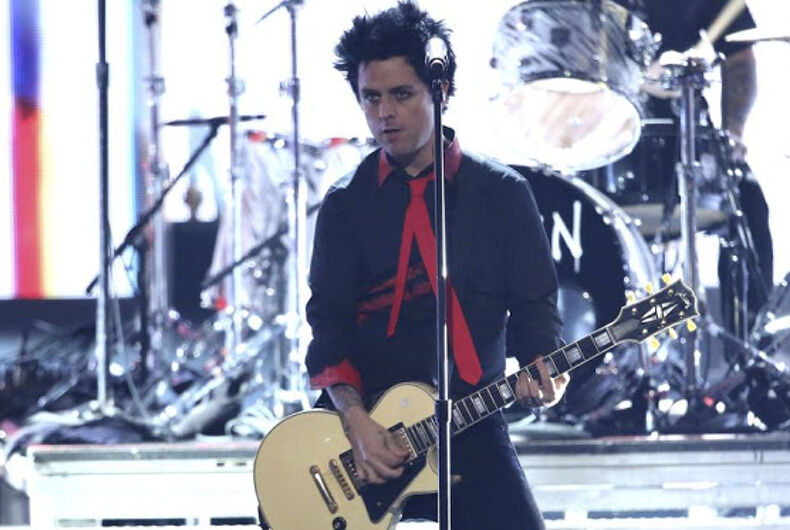 Billie Joe Armstrong of Green Day, performing during the 2016 AMAs.

Green Day took the stage at the 2016 American Music Awards last night to play their single “Bang, Bang” and sound off on their thoughts on a Donald Trump presidency.

“No Trump, no KKK, no fascist USA!” they chanted in the middle of the song, off their new album “Revolution Radio.”

The KKK endorsed Trump and have planned a parade celebrating his victory, to be held on Dec. 3 in North Carolina.

Frontman Billie Joe Armstrong has been vocal in interviews about his feelings on Trump, comparing him to Adolf Hitler in a pre-election interview with Kerrang. He said Trump was taking advantage of the fears of working class people, promising that he, and he alone, could fix it, and that he just couldn’t wait until he was gone.

“It’s interesting. These songs were written before this presidential election,” he told the magazine. “I use a lot of metaphor, and I blow things out, as any good punk rocker should. And it was interesting to see how songs like ‘Bang Bang’ and ‘Say Goodbye‘ went from metaphor to literal, and that’s the part that was tripping me out. It was almost, kind of like, predicting the future, in a way.”

In an Instagram post after the election, Armstrong, who is bisexual, promised he wrote that “our social progress got punched in the face” and warned that “racism, misogyny, transphobia, homophobia, and xenophobes” are not welcome at Green Day shows.

as the outcome of this election is still sinking in i'm left wondering what the hell to do. what to think.. what to say. like the vast majority of you i want to say SOMEthing. our social progress got punched in the face. hard. it's hard to tell if we made any progress at all.. the dark side of our better angels have spoken.. they gloat.. they cheer.. i pity them. i pity them because they have no clue what they've gotten our country into. or the world for that matter.. but one thing is for sure. racism, misogyny, transphobia, homophobia, and xenophobes have no place in around green day and/or any green day event. as for the true angels. if you are black, white brown, of any nationality or any faith, gay, straight, trans, girl, boy, punk, metal, goth, weirdo, skin, freak, and the overall marginalized of all ages we welcome you with all the rage and love we can muster.. we stand by you. together. in love and unity forever.. and that day will come when we get off the ground and punch right back.. even harder rage and love billie joe

Watch Green Day’s full performance at the AMAs below.

And to think, Trump thought what the “Hamilton” cast said to vice president-elect Mike Pence was rude. They better settle in for a long four years of criticism.

It looks like the cast of “Hamilton” won’t be apologizing and you might as well not even bother asking that of Green Day.