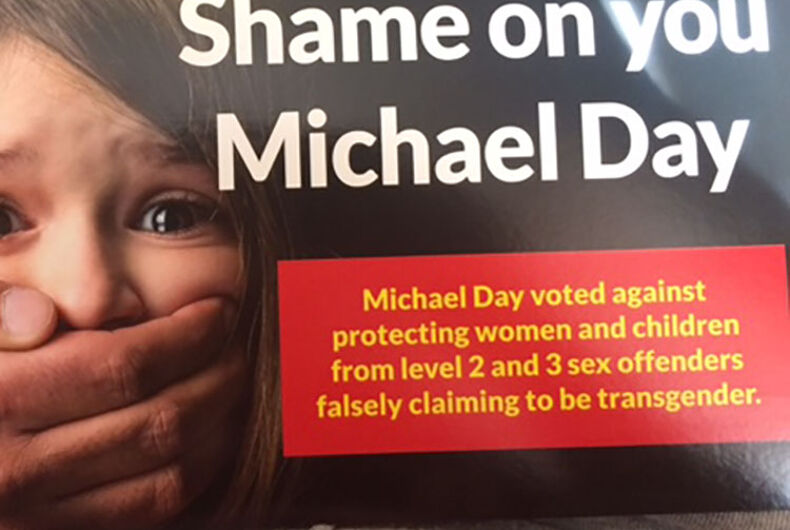 Stuffed in mailboxes across Massachusetts Friday are two controversial flyers that have been condemned by the LGBTQ rights group, MassEquality, for spreading anti-transgender sentiment and creating false fears.

One shows a small, frightened girl photographed in extreme close-up, with a man’s neatly manicured hand clasped over her mouth, and a banner declaring, “Shame on you Michael Day.” Another shows a girl holding a tiny sign reading, “HELP” and the words, “Michael Day Voted Against Every Public Safety Amendment to Transgender Bathroom Bill.” Day is a Democratic state representative running for reelection.

“MassEquality condemns these campaign mailings and calls on all candidates whose districts have received these mailings to denounce them as both offensive and categorically false.”

The Lemay Family counters ignorance and hate from extremists in MA. Thank you for your courage & support. #mapoli https://t.co/kkNV2QzBQp

Day, who is married to his wife Megan and is raising three sons with her, did not issue a statement but shared tweets of support on his social media channels.

If @CharlieBakerMA & @massgop don't act on the shameful mail sent by their Party, they are condoning hate https://t.co/vmrYtXra1p #MaPoli

“We support our champions for equal rights and fairness among the candidates for the Legislature, and thank them for their stands on LGBTQ issues during this election season,” said Deborah Shields, Executive Director of MassEquality.

As of press time, there’s been no comment thus far from Republican Gov. Charlie Baker or the Massachusetts GOP.