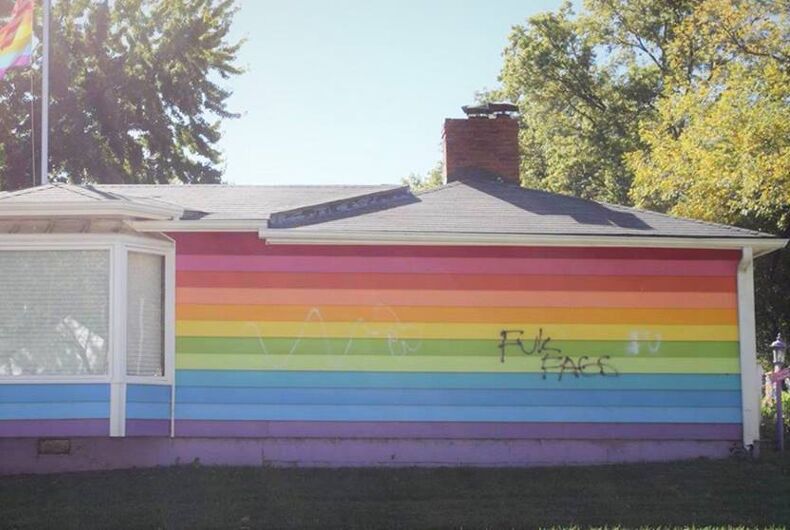 Equality House has been targeted since the election of Donald TrumpPhoto: Facebook

Equality House, the rainbow painted symbol of tolerance and acceptance across the street from the Westboro Baptist Church, is under attack by antigay extremists and they are calling for the LGBTQ community to stand up and fight back.

As we previously reported, Equality House has been shot at as well as defaced with a slur.

Equality House founder and Planting Peace president Aaron Jackson has taken to Facebook to encourage the LGBTQ community and allies to stand up against the increase in harassment, intimidation and attacks that are being reported in the wake of a Donald Trump presidential win.

“Before painting the Equality House, Davis and I thought it would only be three weeks before the house was burnt down,” Jackson writes. “We even set forth escape plans. But something beautiful happened over the course of the last three years…Nothing.”

But he goes on to describe how that has changed in recent months.

Their Little Free Library was covered in feces, the KKK knocked on the door and told them that we would be killed if Trump were elected, and he reports being awakened a few weeks ago by the sounds of five white guys spray painting “fuk [sic] fags” along the exterior of the house, as well as leaving seven bullet holes in a window.

Jackson writes that he spoke with the Southern Poverty Law Center after the incident, and that they confirmed that these sorts of actions are on the rise.

“Ultimately, this is the result of vicious propaganda that is put out every day. When you demonize a population day after day, it ultimately translates in hate violence,” Jackson recently told NBC OUT. “When you have hate groups and organizations claiming that gay men are perverts and pedophiles, it’s no surprise when they get attacked with baseball bats.”

Jackson hopes that these acts will result in the community realizing there can be no more complacency.

“I’ve seen more swastikas in the last couple of days than I have seen in my lifetime outside of historical references,” he writes in his Facebook post. “But what scares me more than the bullets nailing my window and swastikas popping up on street corners around America is the absolute silence from far too many. This is no time to be complacent my friends. We must act.”