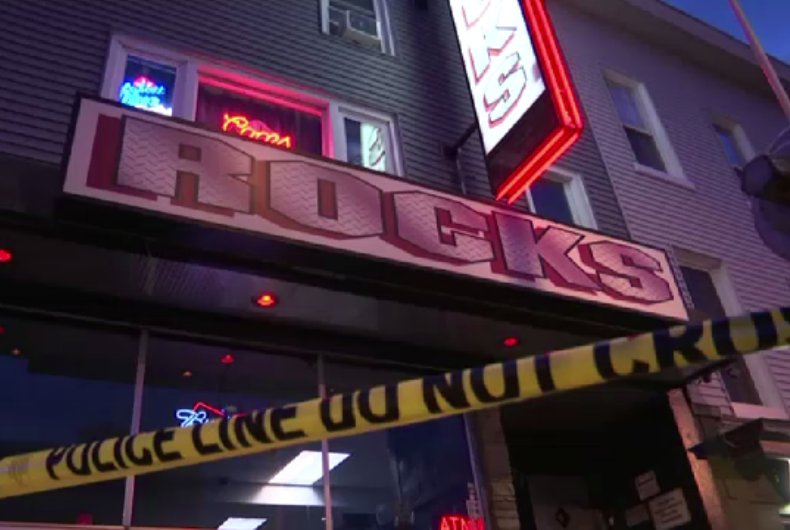 One man is dead and three people recovering from gunshot wounds after a shooting at a gay nightclub in Albany, N.Y., about 150 miles north of New York City.

Police responded to the bar around 2 a.m. Thursday following a call for shots fired, reports WNYT-TV.  According to police, four people had been shot inside Rocks on Central Avenue: two men and two women.

One man died as a result of his injuries at Albany Med, according to WTEN-TV The other three shooting victims, one man and two women, were rushed to Albany Med but they did not suffer life-threatening injuries. They are expected to survive.

The owner told the TV station the shootings happened on the club side of the building, and that he turned over video from surveillance cameras in the club to detectives.

WTEN reported at least one person was seen being taken into custody.

Police assured the LGBTQ community this bar or club was not targeted, but that the shootings appeared to be random. “The one thing we want to let members of our community members know, especially the members of our LGBT community know  that this is not a random act, this bar was not targeted for any specific reason.” Steve Smith, a spokesperson for the Albany Police Department, told Time Warner Cable News.

A Thanksgiving Day event scheduled for today will go on as scheduled, the owner said, but on the bar side of the building.

Watch reports below from WTEN and a follow-up report with more information from WNYT:

No, Democrats don’t need to be more white and male

This Thanksgiving, try something new: include and support someone LGBTQ