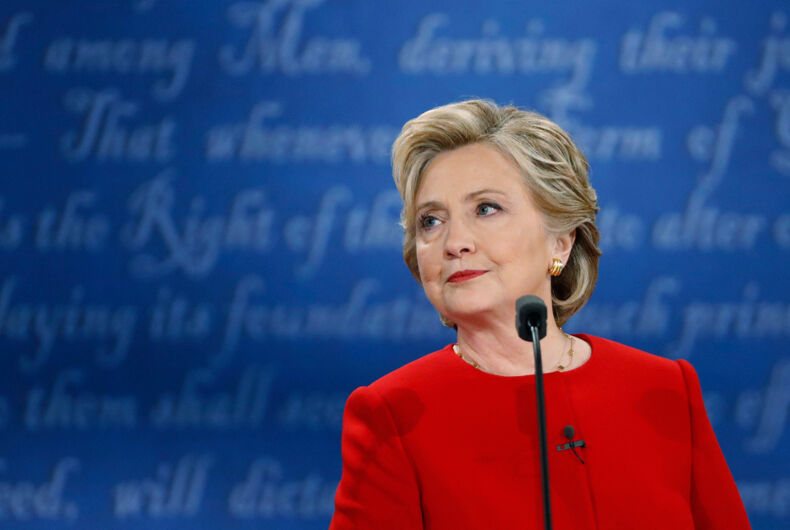 “Over the last few days, officials in the Clinton campaign have received hundreds of messages, emails, and calls urging us to do something, anything, to investigate claims that the election results were hacked and altered in a way to disadvantage Secretary Clinton,” Clinton campaign attorney Marc Erik Elias wrote in a statement. “It should go without saying that we take these concerns extremely seriously.”

Elias said that staff have been quietly investigating concerns about fraud since election day:

[T]his election cycle was unique in the degree of foreign interference witnessed throughout the campaign,” he explained, “the U.S. government concluded that Russian state actors were behind the hacks of the Democratic National Committee and the personal email accounts of Hillary for America campaign officials, and just yesterday, the Washington Post reported that the Russian government was behind much of the ‘fake news’ propaganda that circulated online in the closing weeks of the election.

For all these reasons, we have quietly taken a number of steps in the last two weeks to rule in or out any possibility of outside interference in the vote tally in these critical battleground states.

He said that while the Clinton campaign had not found any “actionable” evidence of tampering, it intends to participate in the process to ensure fairness. The campaign will also participate in recounts in Michigan and Pennsylvania, should Stein bring those to fruition.

“Because we had not uncovered any actionable evidence of hacking or outside attempts to alter the voting technology, we had not planned to exercise this option ourselves,” he said, “but now that a recount has been initiated in Wisconsin, we intend to participate in order to ensure the process proceeds in a manner that is fair to all sides.”

“We certainly understand the heartbreak felt by so many who worked so hard to elect Hillary Clinton, and it is a fundamental principle of our democracy to ensure that every vote is properly counted.

The campaign said it has no illusions of an 11th-hour upset, but believes it’s important to follow through on principle.

“We do so fully aware that the number of votes separating Donald Trump and Hillary Clinton in the closest of these states — Michigan — well exceeds the largest margin ever overcome in a recount,” Elias wrote. “But regardless of the potential to change the outcome in any of the states, we feel it is important, on principle, to ensure our campaign is legally represented in any court proceedings and represented on the ground in order to monitor the recount process itself.”

The Wisconsin recount is expected to begin late next week, after Stein pays the required fee, which she said she expects to be about $1.1 million. Stein has raised $5 million of her $7 million goal toward the recount effort in Wisconsin, Michigan, and Pennsylvania since starting her drive on Wednesday.

Trump ‘condemns’ white supremacists, but can he shake their support?