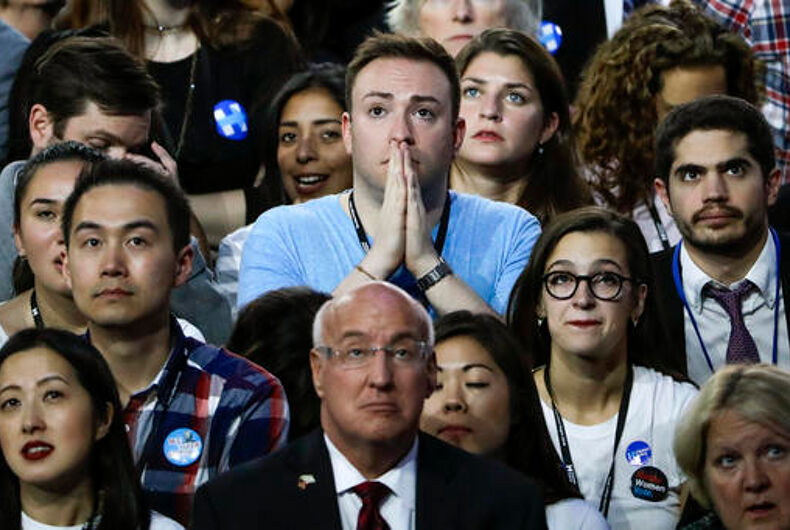 NEW YORK (AP) — On the eve of the election, Hillary Clinton was standing behind a podium bearing the presidential seal. By the time the votes were counted, Donald Trump had captured the White House in a political earthquake.

Clinton conceded the presidency to Trump in a phone call early Wednesday morning, a stunning end to a campaign that appeared poised right up until Election Day to make her the nation’s first female president.

Clinton called Trump after it became clear that the celebrity businessman had won enough states to capture the White House. But she made no public appearance before supporters who had gathered under the glass ceiling of New York’s Jacob K. Javits Convention Center planning to celebrate what was expected to be her historic victory. Clinton planned to make a statement later Wednesday morning.

“We’re still counting votes and every vote should count,” campaign chairman John Podesta said in brief remarks before the shrinking audience. “Several states are still close to call and we’re not going to have anything more to say tonight.”

But inside the venue, the mood had already grown increasingly grim as Trump captured battleground states like Florida, North Carolina and Ohio and shattered a longstanding “blue wall” of states in the Upper Midwest that had backed every Democratic presidential candidate since her husband, Bill Clinton, won the presidency in 1992.

Democrats — starting with Clinton’s campaign and the White House — were left wondering how they misread their country so completely. Aides stopped returning calls and text messages. Supporters left election night parties in tears.

“My disappointment makes me not trust the rest of the world,” said Katie Fahey, who had flown to New York from Grand Rapids, Michigan, wearing a red pantsuit, expecting a victory party. “I don’t even want to go out. I want to wear sweatpants and curl myself up in a corner.”

The results were startling to Clinton and her aides, who had ended their campaign with a whirlwind tour of battleground states and had projected optimism that she would maintain the diverse coalition assembled by President Barack Obama in the past two elections. Clinton, her family and close aides hunkered down to watch returns at a Manhattan hotel suite.

On the final day of the campaign, Clinton literally followed Obama to stand behind a podium with a presidential seal at a massive rally outside Independence Hall in Philadelphia.

As she walked up to the lectern, the president bent down to pull out a small stool so the shorter Clinton could address the tens of thousands gathered on the mall. Before leaving the stage, Obama leaned over to whisper a message in Clinton’s ear: “We’ll have to make this permanent.”

Clinton’s stunning loss was certain to open painful soul-searching within the party, which had endured a lengthy primary between Clinton and Vermont Sen. Bernie Sanders, who drew strong support among liberals amid an electorate calling for change. Clinton repeatedly called Trump unfit and unqualified for the presidency and in the closing days, Obama told supporters in North Carolina that “the fate of the Republic rests on your shoulders.”

“The mistake that we made is that we ignored the powerful part of Trump’s message because we hated so much of the rest of his message. The mistake we made is that people would ignore that part and just focus on the negative,” said Democratic strategist Chris Kofinis, who was not affiliated with the campaign.

Yet her team spent the bulk of their time focused on attacking Trump, while failing to adequately address Clinton’s deep liabilities — or the wave of frustration roiling the nation.

Every time the race focused on Clinton, her numbers dropped, eventually making her one of the least liked presidential nominees in history. And she offered an anxious electorate a message of breaking barriers and the strength of diversity — hardly a rallying cry — leaving her advisers debating the central point of her candidacy late into the primary race.

Nearly a year into her campaign, she still was searching for a message that would address that anger and present a forward-looking vision for the country.

“Do we have any sense from her what she believes or wants her core message to be?” asked chief strategist Joel Benenson, in a February 2016 email, about a memo laying out her message.

Clinton’s campaign was infuriated by a late October announcement by Comey that investigators had uncovered emails that may have been pertinent to the dormant investigation into Clinton’s use of private emails while secretary of state. On the Sunday before the election, Comey told lawmakers that the bureau had found no evidence in its hurried review of newly discovered emails to warrant criminal charges against Clinton.

But the announcement may have damaged Clinton while her campaign tried to generate support in early voting in battleground states like Florida and North Carolina. In the nine days between Comey’s initial statement until his “all clear” announcement, nearly 24 million people cast early ballots. That was about 18 percent of the expected total votes for president.