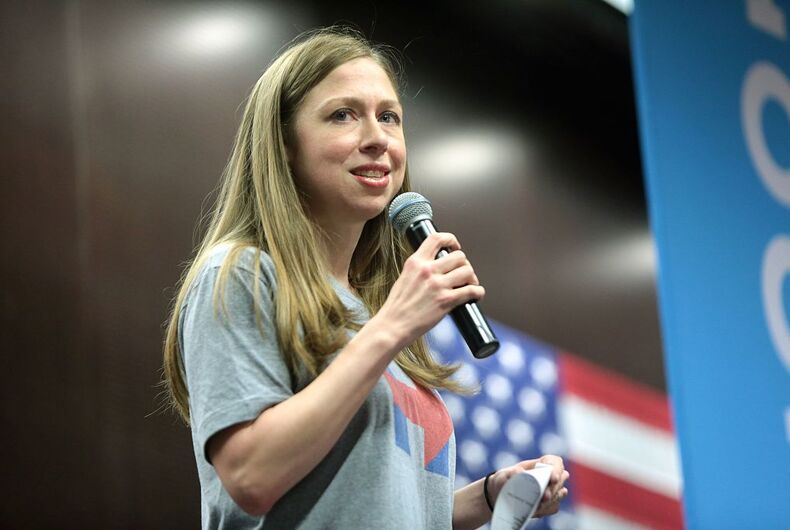 Chelsea Clinton told attendees at a get out the vote event in North Carolina on Saturday of two heartbreaking interactions she had on the campaign trail with children who have experienced increased bullying as a result of the hateful rhetoric stirred up by Donald Trump throughout the campaign, including a girl who feared for her gay father’s safety.

The girl grabbed her hand one day and told her, “Your mom must win,” Clinton recounted. She said she wanted to see a female president but also she wanted Hillary to win because boys at her school were telling her that if Trump one he would force her dad “back in the closet.”

Previously, she met a Pennsylvania woman who got a graduate degree from Penn State after emigrating from Guatemala 12 years ago. She wanted to provide a better life to her then 6-month-old son. She got a job, and they are both “proud American citizens,” she told Clinton.

But at least three of his classmates told him recently to “go back to Mexico” and, “Can’t wait to build a wall to keep people like you out.”

Bullying has become a key issue in this campaign. Hillary Clinton recently revealed a $500 million plan to stop bullying, and Melania Trump has said she would make it her mission as First Lady if her husband is elected.

Trump has reportedly given control over to his campaign due to concerns over his self-control, which President Obama mocked him for at a recent Clinton rally.

The event was hosted by TurnOUT NC, a joint project of the Human Rights Campaign and Equality North Carolina.

Watch Clinton deliver her remarks in the video below.

Trans student comes out to frat brothers: ‘I thought people would hate me’