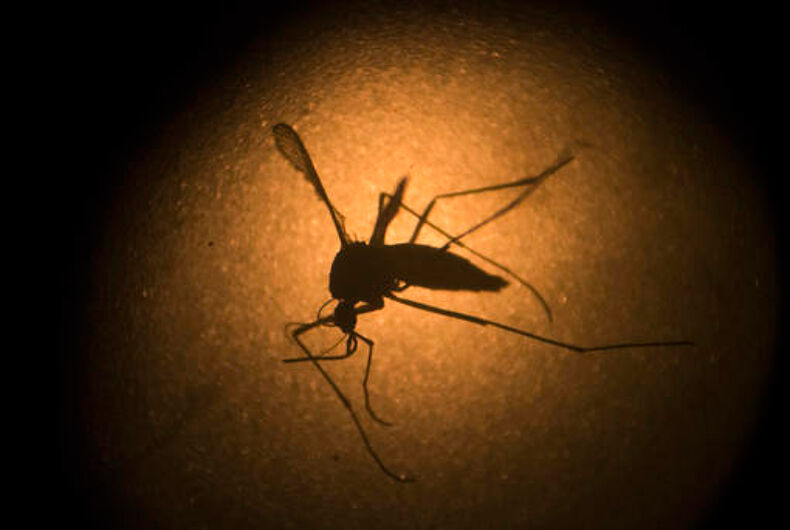 FILE - In this Jan. 27, 2016, file photo, an Aedes aegypti mosquito known to carry the Zika virus, is photographed through a microscope at the Fiocruz institute in Recife, Pernambuco state, Brazil. Zika virus ravages the testes of male mice, sharply reducing sperm counts and fertility, said a study that raises a new specter about its threat to people. The mouse results appear in a paper released Monday, Oct. 31, by the journal Nature. Photo: (AP Photo/Felipe Dana, File)

NEW YORK (AP) — Zika virus ravages the testes of male mice, sharply reducing sperm counts and fertility, says a study that raises a new specter about its threat to people.

Experiments found testes of infected mice shrank about 90 percent by weight, while their output of useful sperm fell by three-quarters on average, and often more.

“We just don’t know that yet,” said Michael Diamond of the Washington University School of Medicine in St. Louis, a senior author of the study. The virus is known to infect a man’s reproductive system and persist in sperm and semen, “so it’s in the right place,” he said.

Diamond said he suspects that in mice, the damage is permanent.

But mice are not men, and experts unconnected with the study agreed that it can’t be assumed that the mouse results apply to people.

Shannan Rossi, who studies Zika in mice at the University of Texas Medical Branch in Galveston, noted that the researchers had suppressed the animals’ immune system defense against the virus. That’s a standard step in such experiments but it adds another level of difference from humans, she said.

Zika, which is transmitted by the bite of a tropical mosquito, is such a mild disease in people that most who get it don’t even know they are sick. But it can cause serious birth defects if women are infected while pregnant, so health officials have been concerned mostly with helping women who are pregnant or about to become pregnant avoid the disease.

Dr. Anthony Fauci, director of the National Institute of Allergy and Infectious Diseases in Bethesda, Maryland, said the study alerts researchers to look for effects in men.

“Don’t jump to the conclusion right off that this is definitely what is happening to the human,” he said. But the mouse finding is a “red flag you need to pursue.”

The mouse results appear in a paper released Monday by the journal Nature. They show the virus attacks the anatomical structure where sperm are made and reach maturity. Testosterone levels also fell.

The infected mice were able to impregnate females at only about one-fourth the normal rate. And in females that got pregnant, the number of fetuses was less than half of normal.

© 2016, Associated Press, All Rights Reserved.
This material may not be published, broadcast, rewritten, or redistributed.
Health and Wellness
scientific studies