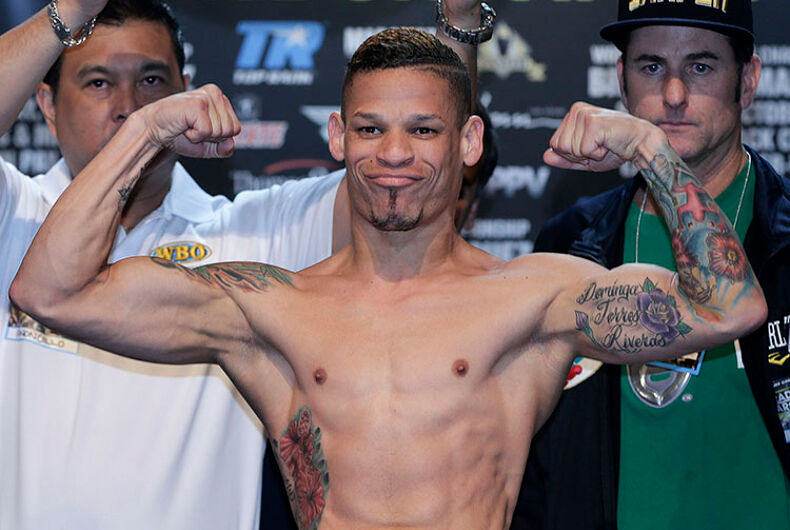 Becoming a world champion for the first time isn’t the only motivation driving Orlando Cruz ahead of his WBO lightweight title fight on Saturday.

The Puerto Rican boxer wants to change perceptions, too.

“I want to quieten the homophobic people talking bad to the LGBT community,” Cruz told The Associated Press. “I want it more for all the gay athletes in the world.”

In 2012, Cruz became the first professional boxer to come out as openly homosexual while competing. Initially, he had reservations about making the announcement, considering the macho nature of his sport, but it turned out to be a good decision.

Cruz has fought nine times since coming out, one of which was against Mexican boxer Orlando Salido for the WBO featherweight title in 2013. Wearing rainbow-colored shorts to show his support for the gay community, Cruz was stopped in the seventh round.

In the past year, he was won four straight fights, collecting continental titles at super featherweight. Now he gets his second shot at a world title in Cardiff, Wales, this weekend, when the 35-year-old Cruz moves up to the lightweight division to fight Terry Flanagan, an undefeated British boxer.

When the fight was announced, Cruz spoke of his determination to become the “first openly gay world champion.”

“I want that other (gay) athletes are not scared to walk into the society. Don’t be scared. Be happy with your life, and happy with your decision. All people are the same.”

It will be Cruz’s first fight in Europe and he is looking forward to experiencing what is usually an intense atmosphere at the Motorpoint Arena. Cruz, nicknamed “El Fenomeno,” said he wasn’t expecting any hostility toward him from outside the ring.

His biggest concern should be Flanagan.

The Manchester-born fighter is making the fourth defense of his title since becoming world champion in July last year. He is unbeaten in 31 fights.

“He’s not tougher, he’s just different,” Cruz said. “My real weight is 130 pounds, so I’ve upped by five pounds. I’ve trained to get stronger and run more. On Saturday, I need to walk into the ring strong.”

Cruz believes it is his time. He said he has “more mentality, more focus” and is comfortable with his life. In February, he married his partner, Jose Manuel Colon, who will watching on TV from their home in Puerto Rico.

No, Democrats don’t need to be more white and male