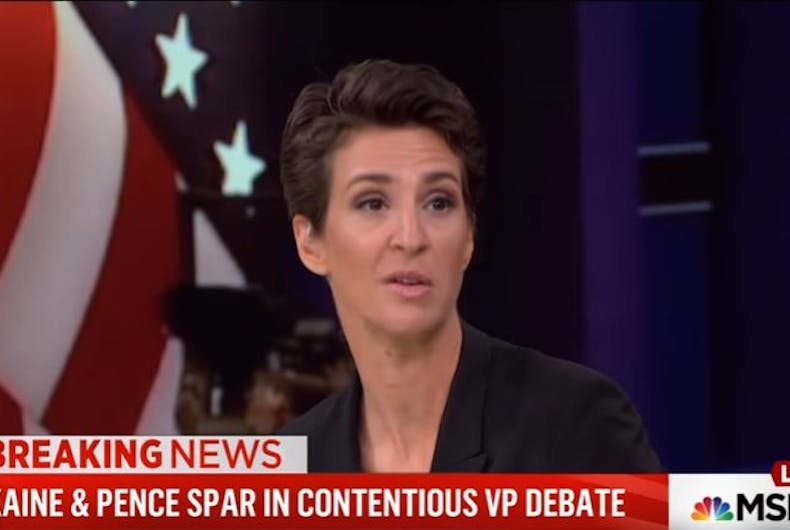 In a post debate wrap-up, MSNBC’s Rachel Maddow asked the question that many of us had on our minds, why did Tim Kaine and the moderator let Mike Pence off the hook on his horrendous LGBTQ history?

“I mean, I don’t think that because I’m gay I was looking to hear more of it than most people were, but I mean Mike Pence is really famous for having pushed the most aggressive pro-LGBT-discrimination bill in the country, [and] having to really embarrassingly walk it back,” she said. “When he was in Congress, he said that HIV and AIDS funding should not be disbursed unless it was also spent — federal dollars — spent to try to cure people from being gay. I mean, he’s got a really, really, really radical position and history and current positions on gay issues. It didn’t come up at all.”

Maddow placed much of the blame at the feet of moderator Elaine Quijano.

“I think that the debate was essentially curated, it was essentially led as if it was refrigerator poetry. Honestly, I think the topics were alphabetical,” she observed. “You can’t have somebody who’s been a religious right warrior his entire public life and get to one question on what was described as social issues in the last three minutes of the debate and can think that you are actually having these guys engage on what they’ve fought about.”

This in spite of the fact that Kaine had invited a married lesbian couple to the debate.