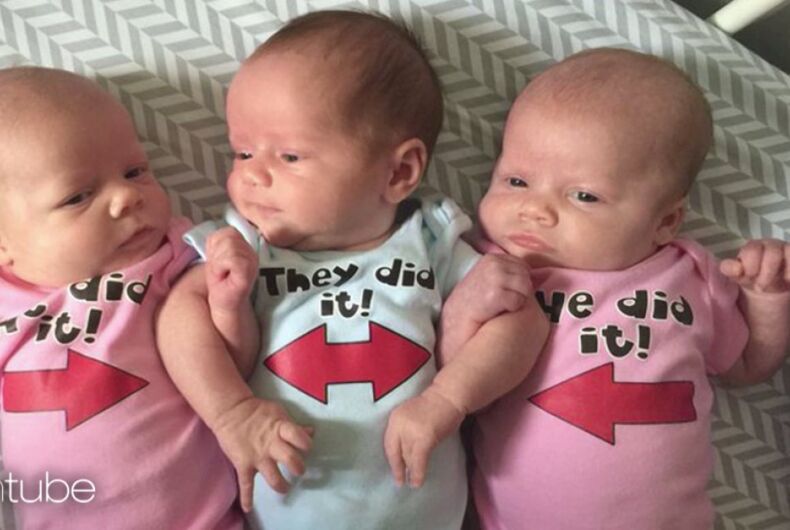 When she’s not interviewing celebrities or making goofy videos, Ellen DeGeneres uses her TV show as a way to give back. She often surprises families who’ve fallen on hard times, showering them with gifts and financial support.

In her most recent give-back segment, Ellen surprised new dads Justin and Adam.

“Justin and Adam have always wanted a family, and this year they got the surprise of a lifetime,” Ellen read from a letter sent in by the dads’ friend Autumn. “The found out their surrogate was pregnant with not one, not two, but three babies.”

Though they had prudently saved for the surrogacy process, the couple hadn’t anticipated they would end up with three babies to feed and diaper.

“They are wonderful fathers who are struggling with the unexpected finances, but are ecstatic about their new family,” Autumn wrote.

So Ellen helped out, bringing the new dads on the show to give them a triplet stroller that says “Our Daddies Were On Ellen,” a $10,000 gift from Shutterfly, and a lifetime supply of diapers for the babies.

The dads talked about tackling air travel with four-month-old Harper, Collins, and Emmett.

“We played a game called watch daddy drink a vodka,” the dads joked.

Ellen asked if the couple had always wanted children.

“We tried for years to have babies, but it didn’t work,” they said, adding that they both dreamed of being fathers.

Watch the full segment below.