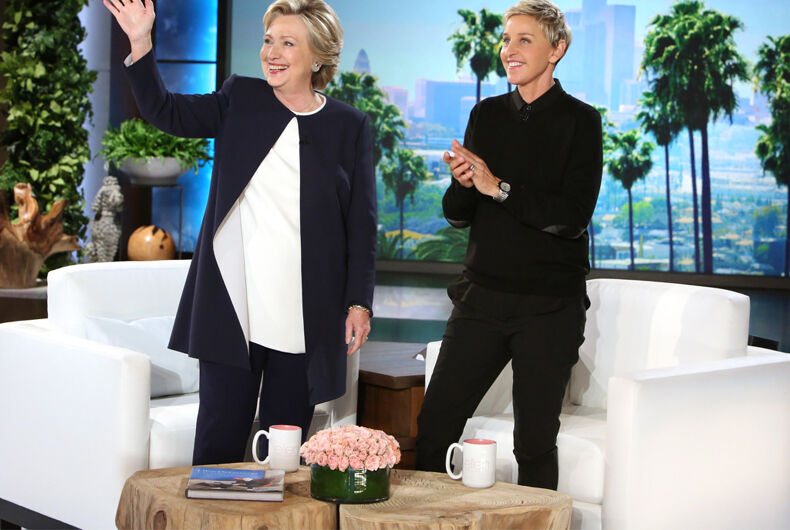 In her first interview since the second presidential debate, Hillary Clinton talked to Ellen DeGeneres about being stalked by Donald Trump on stage, his “hateful” language, and why it’s so important to get out and vote.

Clinton recalled that Trump’s anger was palpable as they faced off in a town hall-style debate following the revelation that Trump was recorded in 2015 boasting about sexually assaulting women.

“He was really all wrought up and you could just sense how much anger he had. And, so he was really trying to dominate and then literally stalk me around the stage,” Clinton said. “I would just feel this presence behind me and I thought, ‘Whoa, this is really weird.’ So I was just trying to stay focused.”

Clinton said she’s not surprised Republicans and others are withdrawing their support for Trump.

“Nobody wants to be associated with this kind of really violent and hateful language,” Clinton said. “It’s not just what Trump has said about women, as terrible as that has been. What he’s said about African Americans and Latinos and Muslims — he has been so insulting and derogatory.”

But even as Trump’s campaign suffers repeated blows from the media and the Republican party, Clinton stressed that her election to the presidency is far from a sure thing.

“I don’t want anybody to think this election’s over. Because it’s been so unpredictable up ’til now that I’m not taking anything for granted,” she explained. “We’ve got to work really hard for the next three and a half weeks because who knows? Who knows what can happen.”

DeGeneres was hopeful, and talked about the future of the country under Clinton’s leadership as if it were a given.

“I cannot wait,” DeGeneres said. “I have high hopes. I trust in the good people of this country to make the right decision.”

And it wasn’t all serious. They also talked about Clinton’s infectious “shimmy,” which she claimed came as much a surprise to her as it did to the nation.

“I knew that I said, ‘Woo!’ I knew that, but I didn’t know that I did the little shimmy to go along with it,” Clinton explained. “And then afterwards I saw it and now people are always saying, ‘Do the shimmy, do the shimmy,’ you know?”

That shimmy no doubt helped inspire a dance-off between Clinton and the debate’s most popular audience member, Ken Bone.

Who has better moves? Watch and decide.

McCarthyism, the Lavender Scare, and the fight for full LGBT equality