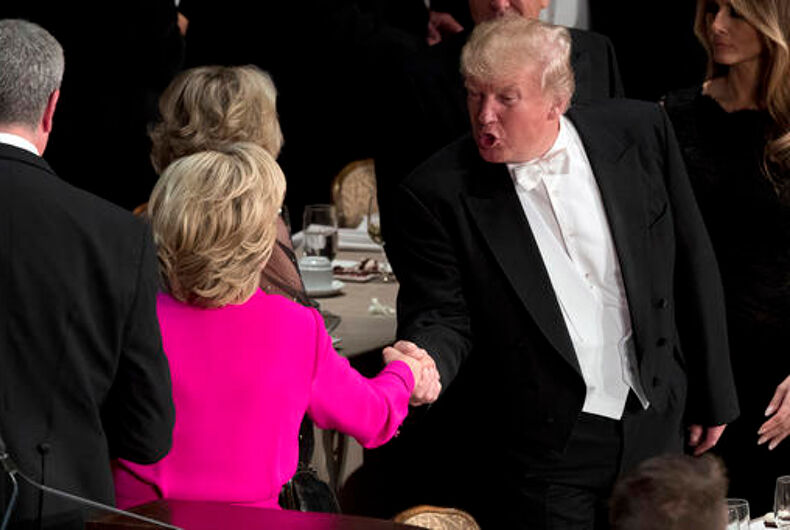 In a political tradition that goes back more than 70 years, Donald Trump and Hillary Clinton traded barbs last night in a roast at the Al Smith dinner. The white-tie fundraiser for Catholic charities is meant to provide some comic relief toward the end of the presidential election season, but instead it elicited rare boos.

Donald Trump went first and started off with a dig, not at his opponent, but at the politicians he’s felt abandoned by.

“The politicians. They’ve had me to their homes, they’ve introduced me to their children, I’ve become their best friends in many instances,” Trump said. “But then suddenly, decided when I ran for president as a Republican, that I’ve always been a no-good, rotten, disgusting scoundrel. And they totally forgot about me.”

As Trump continued on, he got some laughs and applause for self-deprecating jokes including one about his temperament.

“The truth is I’m actually a modest person. Very modest. It’s true,” he said. “In fact many people tell me that modesty is perhaps my best quality.”

So modest, in fact, that he compared himself to Jesus Christ.

But things got ugly when Trump dropped the cloak of humor and began attacking Clinton in a way that prompted repeated boos from the audience and shifted the tone of the entire evening.

“Hillary believes that it’s vital to deceive the people by having one public policy and a totally different policy in private,” Trump said to boos before making a statement that put a damper on the entire event. “Here she is tonight, in public, pretending not to hate Catholics.”

“You know, last night, I called Hillary a ‘nasty woman,’ but this stuff is all relative. After listening to Hillary rattle on and on and on, I don’t think so badly of Rosie O’Donnell anymore,” he said. “In fact, I’m actually starting to like Rosie a lot.”

And while he had surprisingly kind words for O’Donnell, he made a joke at his own wife’s expense while accusing the media of liberal bias.

“Michelle Obama gives a speech and everyone loves it, it’s fantastic,” Trump said. “They think she’s absolutely great. My wife, Melania, gives the exact same speech, and people get on her case!”

Trump turned it around at the end, making sure to slip in a line about supporting so-called religious freedom laws that allow discrimination against LGBTQ people.

“We can also agree on the need to stand up to anti-Catholic bias, to defend religious liberty and to create a culture that celebrates life,” Trump said.

For her part, Clinton conceded she’s not known for her sense of humor, but went on to receive only laughter and applause.