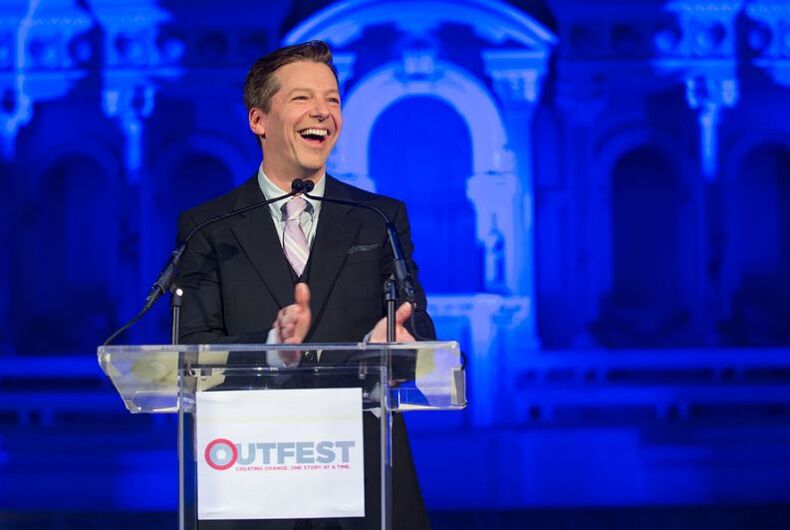 Will & Grace costar Sean Hayes accepted the Trailblazer Legacy award this past weekend at Outfest and confessed he harbored guilt over the fact he had waited until 2010 to come out.

That was a full decade after he won his first Emmy Award for his hilarious turn as Jack McFarland. Hayes was the first actor to win an Emmy for playing a gay character on television, but he said Saturday he regrets not stepping out of the glass closet sooner, as NewNowNext reported.

“I know I should’ve come out sooner and I’m sorry for that,” said Hayes. “Especially when I think about the possibility that I might have made a difference in someone’s life. I would probably be able to sleep a lot better than I do if I had acted sooner, but such is life. We learn our lessons only when we are ready.”

“[Executive director Christopher Racster] said that I took the stereotypical gay sissy and made him human, lovable, flawed and real. While this may be true, I think you should’ve led with flawed because at the time, I was a young closeted actor having his first taste of a little success and unfortunately, in my mind, my lucky break was inextricably tied to me thinking that I had to stay in the closet in order to keep moving forward. Looking back at my choice to stay silent, I am ashamed and embarrassed. What was I thinking? As If any of you had any doubts. I mean, right, could a straight actor ever do this…?”

Hayes then performed his famous impersonation of Cher, which can be seen below along with the rest of his acceptance speech.

@SeanHayes admits he is embarrassed 4 not coming out sooner, during Will & Grace fame, for he could've helped others. #LegacyAwards pic.twitter.com/ChCssFeRnU

Secret deodorant’s amazing new trans-themed ad: ‘No wrong way to be a woman’