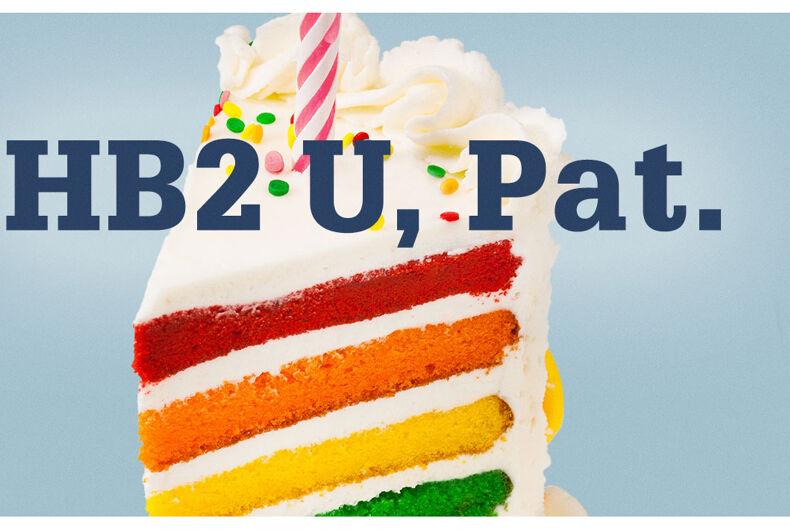 McCrory, it just so happens, allowed a bill to go through in August moving $500,000 from disaster relief to a defense fund of the discriminatory bill he signed into law, HB2, which nullified all non-discrimination ordinances in the state, doing away with LGBTQ protections.

The bill has cost the state millions of dollars and thousands of jobs. It could likely cause him to lose his own job November, as his opponent, Attorney General Roy Cooper, has begun to open up a lead according to polls.

A group calling itself Writers for a Progressive North Carolina wants to make sure everyone remembers the damage that McCrory has done to the state, even if it is his birthday and people might be tempted to be nice to him for a change.

The group purchased a full page newspaper ad in today’s the News & Observer with a headline reading, “HB2 U, PAT” and a picture of a rainbow layer cake with a single candle on top.

“Governor McCrory, we send you our best wishes today as you celebrate your 60th birthday. But the real celebration will begin November 8th when North Carolina votes to move in a more progressive direction,” the ad reads.

It also encourages voters to choose candidates who will “Repeal House Bill 2, value public education and pay teachers fairly, expand Medicaid, and protect the environment.” These are also issues for which McCrory has been criticized in the past.

“We seek to alert all thinking-reading North Carolinians to everything at stake in November’s vote. As native Carolinians, we’ve been educated by our once-renowned public schools and universities. We’ve lately watched with horror as our tradition of intelligence and tolerance is stunted,” author Allan Gurganus, a leader of the Writers for a Progressive North Carolina, told Charlotte Agenda. “North Carolina is sinking under this governor from a standard bearer of advanced thinking to a new watchword for backwardness. McCrory and crew are attempting to undo decades of hard-won promise. As literary chroniclers of our state’s endless beauties and merits, we urge a return to enlightened thinking, ethical standards, and the local decency our traditions once embodied.”

Charlotte-based ad agency BooneOakley helped create the campaign. Owner Dave Oakley said, “We had the idea, but had no clue when Governor McCrory’s birthday was. We googled it and almost fell off of our chairs.”

“I believe HB2 is a discriminatory bill that needs to be repealed. Doing this ad is the least that we could do to help repeal HB2. It’s the right thing to do. And doing the right thing is usually good for business,” Oakley said when asked if he was worried about possible blowback for being involved in a political ad over a controversial topic.