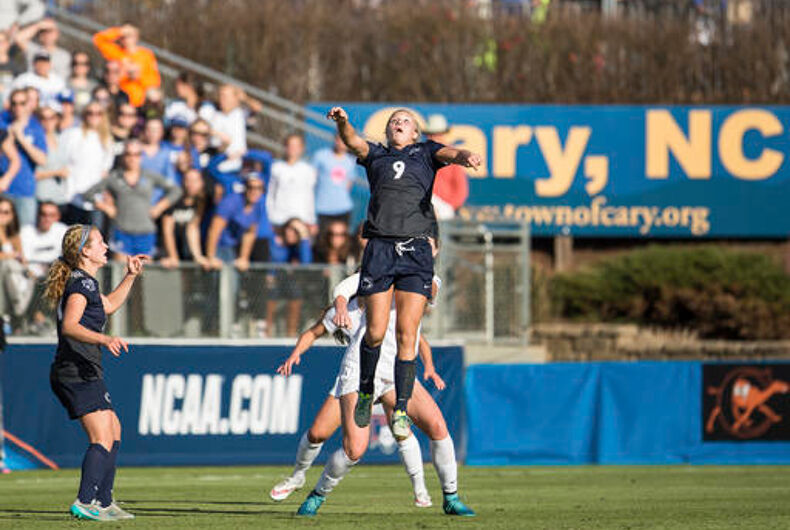 FILE - In this Dec. 6, 2015, file photo, Penn State’s Frannie Crouse (9) jumps for a header as teammate Emily Ogle, left, watches during the NCAA Women's College Cup soccer final against Duke in Cary, N.C. The NCAA relocated its men's basketball regional tournament to Greenville, South Carolina, on Friday, Oct. 7, 2016, after withdrawing the event from Greensboro, North Carolina, because of that state's law restricting the rights of LGBT people. The NCAA also announced the relocation of six other events from North Carolina, including the Division 1 women's soccer championship. Photo: (AP Photo/Ben McKeown, File)

INDIANAPOLIS (AP) — The NCAA relocated its men’s basketball regional tournament to Greenville, South Carolina, on Friday after withdrawing the event from Greensboro, North Carolina, because of that state’s law restricting the rights of LGBT people.

The first and second rounds of the men’s tournament will be played at the Bon Secours Wellness Arena.

The NCAA also announced the relocation of six other events after pulling seven championships from North Carolina last month:

The men’s basketball games, set for March 17 and 19, will be the first time the venue in Greenville has hosted the NCAA men’s tournament since 2002. That was the final NCAA event held in South Carolina after the organization banned the awarding of neutral-site tournaments to the state for flying the Confederate flag on statehouse grounds.

That ban ended in July 2015 when the state took down the flag after nine parishioners were killed at a Charleston church.

The NCAA pulled the events from North Carolina in September in response to the law known as HB2, which excludes gender identity and sexual orientation from local and statewide anti-discrimination protections. It also requires transgender people to use restrooms at schools and government buildings corresponding to the sex on their birth certificates.

The NCAA’s move is part of a public and business backlash since Republican Gov. Pat McCrory signed the law this year. Days after the NCAA removed events from North Carolina, the Atlantic Coast Conference pulled its football championship game from Charlotte and has since moved it to Orlando. It’s among several ACC relocated events.

Charlotte had passed a local anti-discrimination ordinance for LGBT people. In response, the North Carolina legislature approved the current statewide law in March, which overrides local ordinances that ban discrimination.