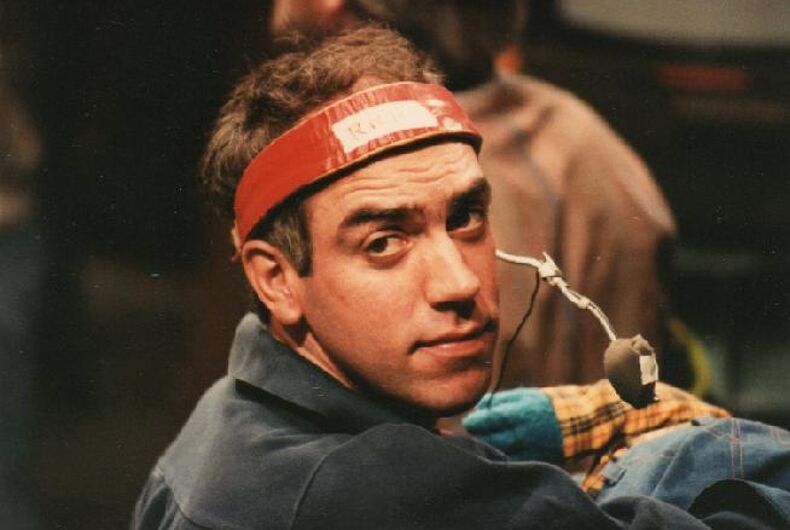 Many of Richard Hunt’s Muppet characters are household names: Beaker, Scooter, Janice. Statler and Waldorf. Hunt even played Miss Piggy for a season of The Muppet Show, Elmo for a year on Sesame Street. So why is his name not more well-known?

Though many people may not know Richard Hunt’s name, they already know his spirit – for so much of his spirit is present in the work.

Richard Hunt joined the Muppets in 1970 by cold-calling them from a Manhattan pay phone. He was 19 years old, in the city for the day from his nearby hometown of Closter, NJ. “Hey, I’m a puppeteer, can you use me?” he asked amiably. As it turned out, there was an audition that very afternoon. Hunt went right over. He worked on Muppet projects for a little over a year, and was hired full-time with Sesame Street in 1972.

This is a very Richard Hunt move: spontaneous, gutsy, gregarious, and ultimately successful, on his own terms.

Hunt worked on Sesame Street for the next twenty years, or the rest of his life. He began at the bottom – or at the back, rather, as the hind end of Mr. Snuffleupagus. Hunt also assisted more established puppeteers as they performed, often serving as the “right hand” of “live-hand” puppets such as Ernie. Hunt won his first Emmy in 1974, only 23 years old. He campaigned for years to perform his own characters, and finally got one – a silent character, to his great chagrin!

Hunt hammed it up with speechless construction worker Sully, and soon performed dramatic pianist Don Music, bovine drag queen Gladys the Cow, and the femmier half of the Two-Headed Monster. In later decades he would perform other Sesame notables such as avian opera star Placido Flamingo; dim-witted cowboy Forgetful Jones; and, for one season, that ubiquitous cherry-red cherub, Elmo.

By the mid-70s Hunt had a network of lovers, friends and acquaintances across the city. One lover remembers, “Richard would turn up in the middle of the night, looking for fun. He was a spontaneous kind of guy.”

When he was just 25, he got the chance of a lifetime – to work on The Muppet Show. His first year he stayed at the colorful Portobello Hotel in London’s Notting Hill, meeting such characters as Patti Smith and the Sex Pistols. He even met the Queen of England, after the Royal Variety Performance in 1977. A friend describes one boyfriend of the time as looking like “a very tall and older Daniel Radcliffe.” The Muppet Show cast, including Hunt, was nominated for an Emmy for Outstanding Comedy-Variety Series every single year it was on the air, winning in 1978.

In 1980, Hunt returned to New York for the busiest decade of his life, his thirties. He worked on Sesame Street in New York, Fraggle Rock in Toronto, often alternating weeks, flying between the two cities. He stepped up as a mentor on both shows, holding auditions, running meetings and often holding down the fort. He debuted as a director on Fraggle Rock, with the penultimate episode “The Honk of Honks,” in addition to directing two Sesame videos. He acted on-screen in movies such as Trading Places, with Eddie Murphy and Dan Ackroyd, and Oxford Blues, with Rob Lowe and Ally Sheedy.

In 1985, Hunt and his lover N. were vacationing in Rome when N. became ill and the couple cut the trip short. Just six weeks later, N. was dead, from complications due to the AIDS virus. Diagnosed himself as HIV-positive in the late 80s, Hunt was sure he would be the next to go. But to everyone’s surprise, Jim Henson died in May 1990 from a streptococcal infection. Hunt led Henson’s memorial service.

I see this spirit in the stories people tell of his perpetual lateness, how he would streak into the theater minutes before the curtain, read the newspaper until seconds before filming a performance, putting down the paper as the camera went on. I see it in his love of fine dining and wine, his deep appreciation for beautiful places like the outer edge of Cape Cod and London’s Vale of Health and the canals of Venice, and his great generosity to the people he loved, often wrestling them to the floor in order to grab a restaurant check.

This spirit also made him a brilliant performer, unafraid to ad-lib, to upstage, to push the envelope, to go for the laugh. He was an artist. He was an entertainer. And he created many characters, like hilarious squeaky Beaker, who make us laugh to this day.

Richard Hunt died on January 7, 1992, in Manhattan. His memorial service was held in February 1992 at the Cathedral of St. John the Divine, where N.’s and Henson’s memorials had been held.

My 90-page zine biography of Hunt, The Rainbow Connection: Richard Hunt, Gay Muppeteer is available through my website, JessicaMaxStein.com. I am currently working on the full-length book.

The ignored issue so far: Why LGBT rights still matter in this election