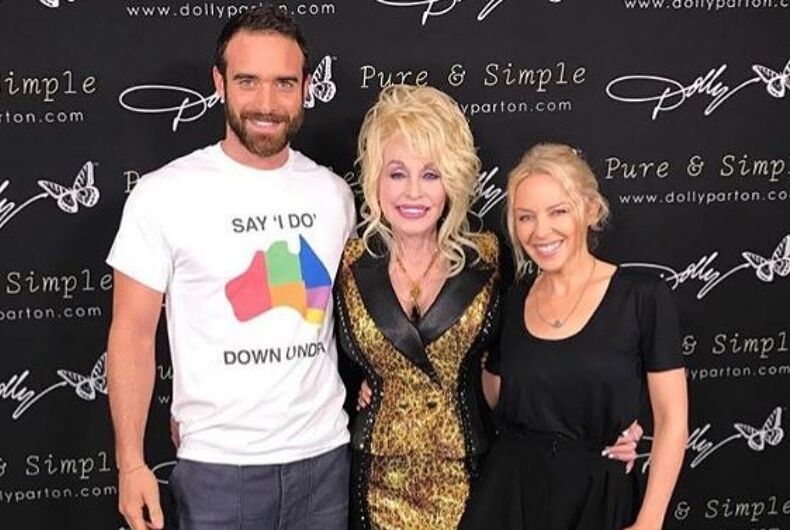 Kylie Minogue and Joshua Sasse with Dolly Parton, launching the "Say I Do Down Under" campaign.Photo: Instagram

Australian singer and actress Kylie Minogue and fiance English actor Joshua Sasse are ready to wed, and wish to do so in Melbourne, but will hold off until marriage equality comes to Australia.

The couple are avid supporters of the “Say I Do Down Under” campaign.

“There are chances of a Melbourne wedding…(but) we will not get married until this law has passed in Australia,” Sasse told Australia’s Seven Network.

“When I found out that gay marriage was illegal in Australia, I was astounded,” he said. “I simply can’t fathom on any level, whether it’s moral or religious or anything, that I have the right to get married and to marry the person that I love and that somebody else doesn’t because of their sexual orientation.”

“Why are we any more important than anyone else?” he asked. “It’s not right and something’s got to be done about it.”

Actress Margot Robbie also showed her support when she wore a “Say I Do Down Under” shirt on “Saturday Night Live.”

If parliament approves it, a national non-binding ballot known as a plebiscite will take place next February, BBC News reports.

Some supporters of same-sex marriage in Australia worry that a nationwide debate ahead of a plebiscite will make way for abusive rhetoric that could be emotionally damaging to many.

This point was brought up by the gay brother of Australian Senator Bridget McKenzie, who confronted his sister on ABC’s Q&A.

“Given the majority of parliamentarians and Australians now support marriage equality, is a $160 million plebiscite necessary, and what impact do you think the debate will have on the emotional wellbeing of gays and lesbians like me,” said Alastair McKenzie.

His sister said it would only be damaging if “Australians choose not to respect each other’s views in this particular debate.”

“I believe it is a conscience issue, and that the definition of marriage is between a man and a woman. Polls would suggest I’m in the minority,” she added.

Celebrities, Joshua Sasse, Kylie Minogue, Marriage, same-sex marriage, Say I Do Down Under

Hillary Clinton: ‘We need to stop the violence and save LGBT lives’