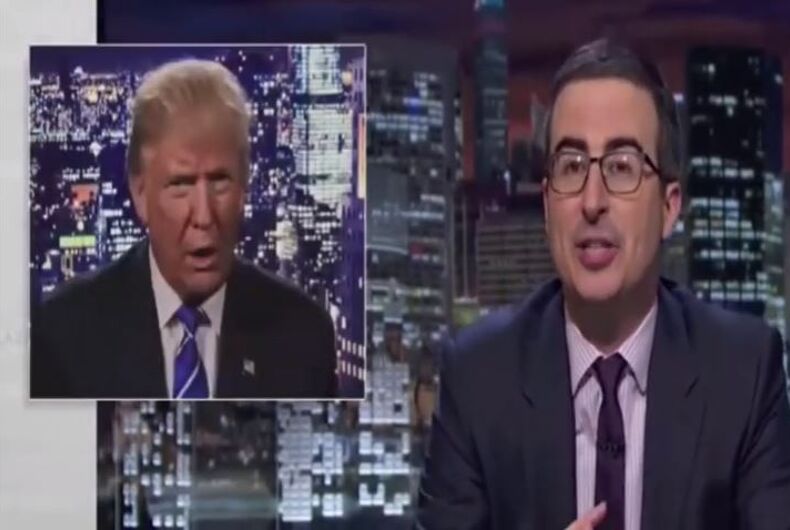 John Oliver has no love for Donald Trump.

In a video recorded prior to last night’s debate, he ripped into the Republican Party nominee for president so hard it was almost difficult to watch. Except actually it was perfect.

He also had some leftover disgust for the members of the GOP who still support him, as well as for Trump’s “hug pimp,” the loathsome Billy Bush.

Oliver plays the now infamous 2005 clip of Trump bragging about sexually assaulting women and, like the rest of us with any sense, can barely believe we have somehow managed to hit an even lower rock bottom in this election year.

“Let me just remind you that last Sunday I told you that if you looked above the clouds, you would see rock bottom,” Oliver said. “But if you look up there now, just way way up there, all the way up high, you will see, right up in the distance, where we were this time last week.”

Oliver calls out Republicans who have condemned Trump without withdrawing their support, as well as for supporting him through the many racist, xenophobic and sexist low points to which his campaign has sunk up to now.

“The only way you get to be shocked and outraged now is if you were cryogenically frozen until Friday afternoon and that ‘Access Hollywood’ tape was the first thing you saw upon being reanimated,” Oliver said. “Anything less than that, and this is on you too.”

But his strongest words are for the man at the top of the ticket himself:

“In a way, perhaps we’ve always been heading to this historic moment. The first female presidential nominee versus the human embodiment of every backwards, condescending ‘Mad Men’-esque boys’ club attitude that has ever existed rolled into one giant, salivating, dick-size-referencing, pussy grabbing warthog in a red power tie.

“I’ll put it this way: If American democracy is a computer game, and Hillary is completing women’s hundred year quest to get to The Oval Office, it kind of makes sense that this would be the final boss.”