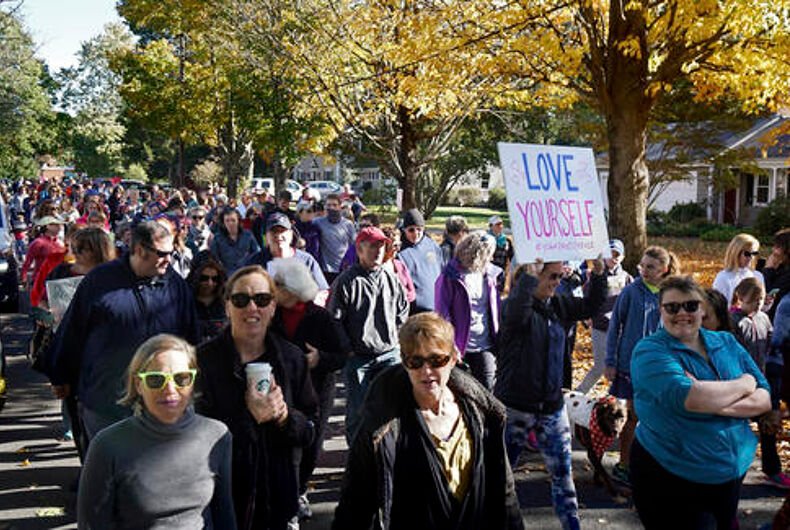 People march for "yoga pants parade" in Barrington, R.I., Sunday, Oct. 23, 2016. Hundreds of women, girls and other supporters proudly donned their yoga pants Sunday afternoon as they peacefully paraded around the Rhode Island neighborhood of a man who derided the attire as tacky and ridiculous. Photo: (Kris Craig/Providence Journal via AP)

BARRINGTON, R.I. (AP) — Hundreds of women, girls and other supporters proudly donned their yoga pants Sunday as they peacefully paraded around the Rhode Island neighborhood of a man who derided the attire as tacky and ridiculous.

Alan Sorrentino said the response to his letter to the editor, printed in The Barrington Times on Wednesday, has been “vicious” and that he’s received death threats. He maintained the letter was meant to be humorous.

But organizers said even if Sorrentino’s letter was meant to be a joke, the message is clear.

“Women are fed up with the notion that we have to dress for people’s visual pleasure,” said Jamie Burke, parade organizer.

The so-called yoga pants parade wasn’t a protest against Sorrentino specifically but part of a bigger movement against misogyny and men dictating how women should dress, organizers said.

More than 300 people — many of them women and young girls — came out for the social media-driven event in the affluent, coastal town of Barrington, wearing yoga pants of different styles and colors.

Some held up signs that said “Peaceful Pants Party” and “I’ve Got Passion For My Pants.”

Sorrentino, in his letter, described yoga pants as the worst thing in women’s fashion since the miniskirt. He argued that they belong in the yoga studio and that women over age 20 shouldn’t wear them in public.

Sorrentino told WPRO-AM the letter was meant to be a humorous break from the current political campaign rhetoric and that he doesn’t really have an issue with yoga pants. He says he even owns a pair.

Sorrentino likened the death threats and expletive-laden voicemails he says he’s received to what he’s experienced for years as an openly gay man.

“It’s vicious and intimidating,” he said Saturday on WPRO-AM. “The fact that this is seen as an appropriate reaction to something I wrote in the paper is really disgusting.”

On Sunday, a police detail was posted in front of Sorrentino’s home, which had a hand-written banner saying “Free Speech” hanging over it. Burke said she advised participants to respect a quiet zone by his home. A call to Sorrentino on Sunday went unanswered.

© 2016, Associated Press, All Rights Reserved.
This material may not be published, broadcast, rewritten, or redistributed.
News (USA)
Rhode Island

Oprah calls out undecided voters: You don’t have to like Hillary to vote for her