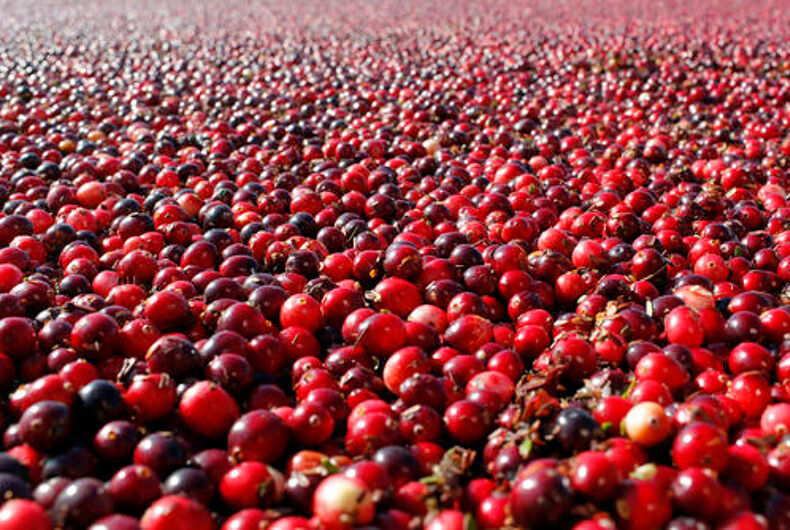 FILE - This Thursday Oct. 11, 2012 photo shows cranberries in a field in South Haven, Mich. In a study published Thursday, Oct. 27, 2016 in the Journal of the American Medical Association, cranberry capsules didn't prevent or cure urinary infections in nursing home residents. The research adds to decades of conflicting evidence on whether cranberries in any form can prevent extremely common bacterial infections. Photo: (Mark Bugnaski/Kalamazoo Gazette - MLive Media Group via AP)

The research adds to decades of conflicting evidence on whether cranberries in any form can prevent extremely common bacterial infections, especially in women. Many studies suggesting a benefit were based on weak science, but that hasn’t stopped marketers and even some health care providers from recommending cranberry juice or capsules as an inexpensive way to avoid these uncomfortable and potentially risky infections.

The new study , published online Thursday in the Journal of the American Medical Association, used rigorous methods and the results are convincing, according to a journal editorial. Health care providers who encourage using cranberry products as a prevention method “are doing their patients a disservice,” the editorial says.

Urinary infections lead to nearly 9 million doctor visits and more than 1 million hospitalizations each year. Men, because of their urinary anatomy, are less vulnerable, while almost half of all U.S. women will develop at least one of these infections in their lifetime. Symptoms can include painful, frequent urination and fatigue. Antibiotics are often used to treat the infections, which usually are not serious but can lead to kidney infections and sometimes dangerous bloodstream infections. Urinary infections are the most commonly diagnosed infection in nursing home residents, but they often have no obvious symptoms and evidence suggests antibiotics have little effect in these older patients without symptoms, the study authors say.

The research included 147 older women in nursing homes who were randomly assigned to take two cranberry capsules or dummy pills for a year. The number of women with laboratory evidence of infection — bacteria and white blood cells in their urine — varied during the study but averaged about 29 percent overall in both groups. Ten infections in the cranberry group caused overt symptoms, compared with 12 in the placebo group but that difference wasn’t statistically significant. There also were no differences in hospitalizations and deaths between the two groups. The National Institutes of Health helped pay for the research, led by Dr. Manisha Juthani-Mehta, a Yale University infectious disease specialist.

Ocean Spray Cranberries, Inc., one of the best-known makers of cranberry-based products, promotes the purported health benefits on its website. Responding to the new study, company spokeswoman Kellyanne Dignan cited previous studies that suggested a benefit and said, “We take great pride in our cranberry products and the health benefits associated with them.”

People who think they have a urinary infection should see a doctor for diagnosis and treatment, but avoid cranberry products “in place of proven treatments for infections,” according to the National Institutes of Health alternative medicine branch.

The journal editorial says additional research is needed to find effective treatments for nursing home residents and others.

“It is time to move on from cranberries,” the editorial says.

© 2016, Associated Press, All Rights Reserved.
This material may not be published, broadcast, rewritten, or redistributed.
Health and Wellness
scientific studies

Will HB2 or a hurricane influence North Carolina’s gubernatorial race the most?