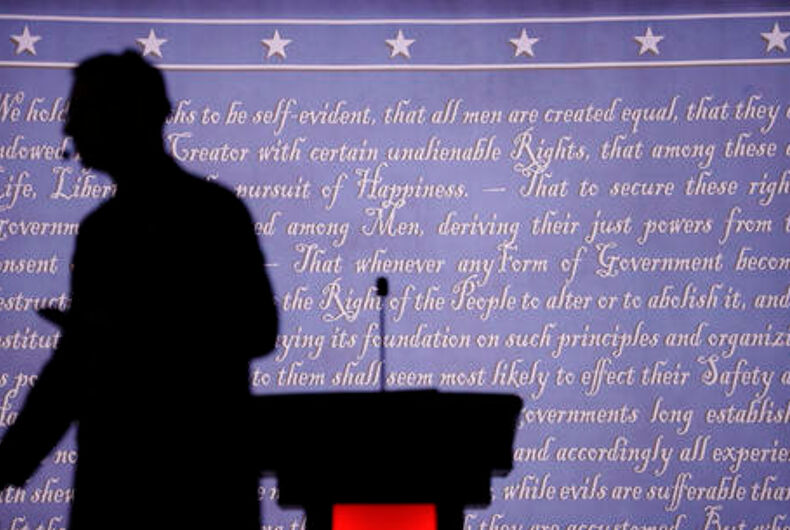 Tonight’s presidential debate between Hillary Clinton and Donald Trump will be the equivalent of pitting the smartest kid in the class against the school bully. Objectively, you know the smartest kid is going to win. But in this case, the judges are secretly rooting for the bully.

So how will the media be judging the debate? They will likely expect Clinton to be brilliant on policy, which then allow her to be called boring or, worse still, condescending. (Because being smart is a drawback in these things.) As for Trump, all he has to do is refrain from showing up wearing a Klansman’s hood and odds are he will be declared to look presidential.

Trump has been graded on a curve by the mainstream media throughout this entire campaign. He has said so many shocking things that the press is inured to them. He lies with such facility that his campaign could be called the Home of the Whopper (and not the whopper Trump would like to possess).

Clinton, on the other hand, cranks out detailed policy proposals that you have never heard about, because the press is more concerned about Trump’s feuds with Megyn Kelly than with the country’s future.

Presidential debates generally have little impact on a race. President Obama was listless in his first face-off with Mitt Romney in 2012, although he recovered for the second debate. Ronald Reagan looked like an incipient Alzheimer’s patient in his first debate with Walter Mondale, until he reconnected with his inner Gipper.

But what the debates do is solidify a narrative about the candidates. In a close race, that can be deadly. The scariest example is the 2000 debates between Al Gore and George W. Bush. People who watched the first debate thought Gore won. But people who didn’t watch the debate believed that Bush won, based on the media coverage, which portrayed Gore as an arrogant know-it-all compared to good ol’ boy W. We had eight years to consider the impact of that favoritism.

If you think that can’t happen again, you might want to book your room for the Trump inauguration now. Clinton has given the press more to work with than Gore ever did in terms of apparent conflicts of interest, allowing reporters to build a narrative that Clinton and Trump are both equally flawed. They are not. Trump is in a class by himself.

Yet Clinton’s coverage has been overwhelmingly negative, according to one recent study, largely because of her email server and the Clinton Foundation. Meanwhile, any day that Trump appears only mildly crackpot by his own high standards gets recorded as an example of discipline.

Trump has set such a low bar for himself that, should he fail to rely on his trove of racist and misogynistic statements, he will come across as a credible candidate. At the same time, the media has impossibly high expectations of Clinton (a problem that any successful women will attest to as common). If she doesn’t deliver a performance on par with a JLo concert, she’s likely to be declared a loser.

What would solidify that story line is if Trump deviates from right-wing ideology. One possibility is if he says something positive about LGBT rights, as he did during the GOP convention (sorta). The press will speaking glowingly about how Trump is reshaping the GOP and ignore the fact that Trump has surrounded himself with the most homophobic campaign staff ever.

You can think of the presidential debates as the ultimate in reality TV. Just don’t fool yourself into believing that what you read about the debates afterwards reflects reality at all.

Will & Grace (and Jack and Karen) reunite for election