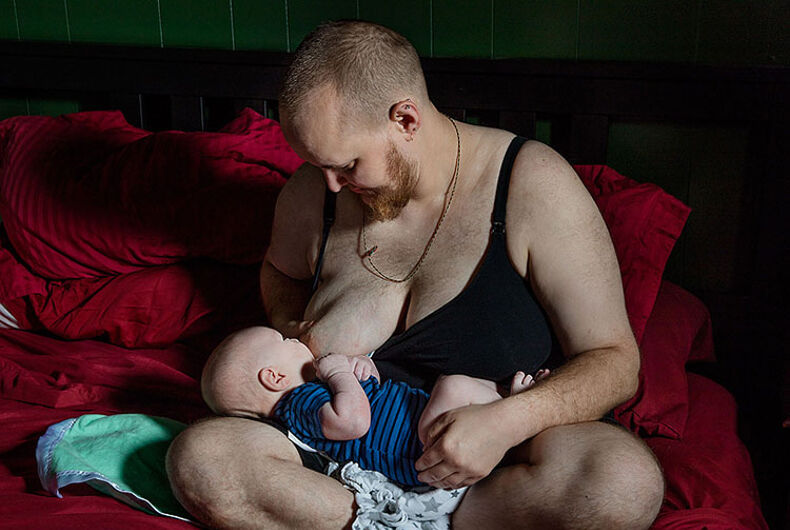 There have been countless stories of women being shamed for publicly breastfeeding or sharing snapshots of how they nurture their babies, but now comes a photograph of someone transgender doing that, and it has people across America talking.

Time magazine’s next issue includes a prominent photograph of Evan Hempel nursing his newborn son. It also appears in People.

Hempel has wanted to have a baby as long as he can remember, even though he felt being female wasn’t his authentic self. Raised as one of three sisters, the Boston native came out as trans long ago and began hormone replacement therapy in 2003, injecting testosterone.

In 2011, Hempel and his partner, a woman, decided to have a family, and as he put it, “it would be best for him to carry the child.” He stopped his testosterone treatments and start trying artificial insemination with donor sperm. After a few failed attempts including a miscarriage, Hempel finally delivered a healthy baby boy in 2015.

His older sister, Jessi, documented the ordeal for Time, including the photographs of Hempel chestfeeding, which is what trans men call the act of breastfeeding.

Although some trans men who decide to give birth encounter difficulty resolving the revival of aspects of their femininity through childbirth, Hampel told his sister, it turned out to be a non-issue for him.

“It was a gamble,” he said. “I didn’t know how I’d feel, but it turns out I just feel like it’s really cool that my body can do this.”

The story documents his coming out to his boss, his battles with his health insurer and the reaction of family and friends. Read Jessi’s account here.