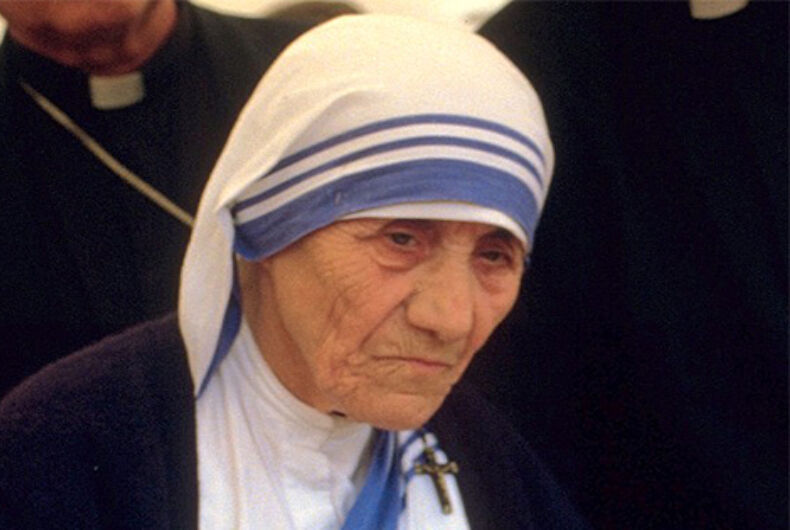 Mother Teresa was declared a saint in a canonization Mass held by Pope Francis in the Vatican on Sunday. The iconic nun’s life and work grabbed hold of public consciousness since she began her work with the sick and dying in the 1950s and has only grown since then, culminating in her sainthood. She is seen as a symbol of peace, love and acceptance throughout the world. Yet one aspect of her personal belief system is not often discussed: her views on homosexuality.

Teresa’s view on poverty and against abortion are much more well known and have proved controversial. That is in part because she had much less to say on the topic of homosexuality, which itself is telling. In fact, she made no public statement on the issue. What little we do know can be interpreted in multiple ways, fitting for a woman whose work and life have drawn such laudatory praise and harsh criticism.

Most famously, Teresa is said to have stopped an interviewer when asked about her views on homosexuality, objecting to the word, saying they should instead be called “friends of Jesus.” Finding a primary source for this interaction proved fruitless.

If the reports are accurate, however, one could view Teresa’s reaction as a nod of support. At the same time, her objection to the term “homosexual” suggests there is something wrong with having that sexual orientation. This support seems to be of the “love the sinner, hate the sin” variety.

That reading of her supposed remarks would align her with Pope Francis, who has signaled support for gay people only so long as they don’t couple up — transgender individuals, meanwhile, don’t even get off that easy.

A former nun who worked with Mother Teresa tells a story that offers another glimpse into what she may have thought about gay people.

Mary Johnson spent 20 years as a Missionary of Charity, the order founded by Mother Teresa. Johnson, then known as Sister Donata, has written a memoir about that period in her life called An Unquenchable Thirst: Following Mother Teresa in Search of Love, Service, and an Authentic Life.

In one passage, Johnson, who reports having herself had both heterosexual and homosexual affairs during her time with Missionaries of Charity, writes about a sister who was dismissed from the order and sent home over her alleged lesbianism.

“When [Mother Teresa] took one of the sisters to her house, that sister’s mother received them and said, ‘It would have been better if you had brought a coffin to my house today than my daughter in this disgrace.’ And when Mother would tell this story she would always express great sympathy for the [sister’s] mother, as though, for her, it would have been better had she brought a coffin,” Johnson writes.

Johnson also encountered an abusive nun during her time in the order. In an interview posted to her website, Johnson talks about how Teresa gave the woman another chance, and what her motivations might have been for doing so:

Abuse should never be tolerated, and there are no real justifications. Part of the problem is that in official Catholic teaching, EVERY sin against chastity is a mortal sin – there are no gradations in seriousness of matter between indulging an inappropriate sexual thought and adultery – it will all send you to hell. There is inadequate appreciation for the fact that some sexual sins harm other people, and that those are actually worse. Plus, Catholics are taught that the Christian thing to do is to forgive. I’m sure that when Mother Teresa kept giving an abusive sister another chance, she thought it her Christian duty to forgive, the way Jesus forgave the woman caught in adultery.  Jesus in the Gospels was never too concerned with justice. Mother Teresa was the same. But I think a mature person has to be concerned with justice, with the consequence of our actions, and not just with our intentions.

Mother Teresa was clearly willing to work in service of those in the gay community. Among those Teresa’s Missionaries of Charity opened hospices for were AIDS patients, launching some of the first such residences in places such as New York, Philadelphia andWashington, D.C.

Mother Teresa’s decision to not make public statements against homosexuality suggests she was not particularly concerned about the issue, as compared to say abortion, which she quite clearly and loudly condemned. Still, there is evidence suggesting she viewed homosexual acts as a sin that must be avoided, but for which one can be forgiven. This would align with Catholic teachings, as Johnson suggests and as Pope Francis continues to uphold today.

So her views on the matter, like so much else about her life and times, are open to interpretation, speculation and debate. Now that she is officially a saint those debates will continue and likely intensify.