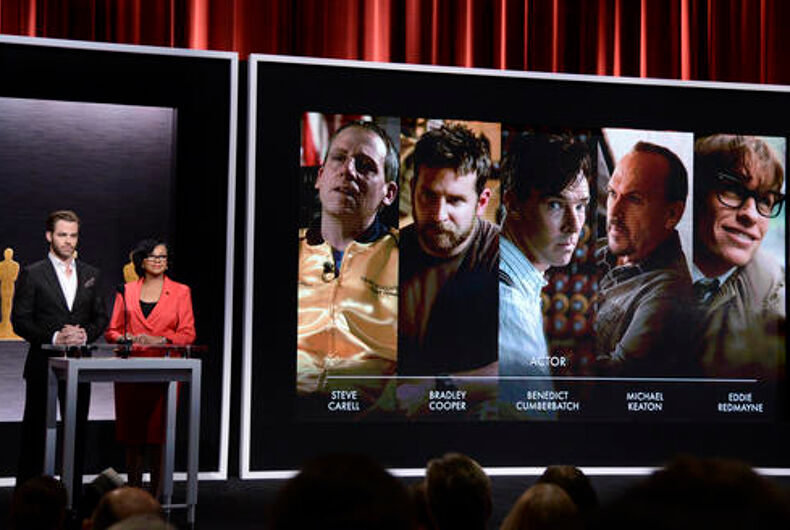 FILE - In this Thursday, Jan. 15, 2015 file photo, Chris Pine, left, and Academy President Cheryl Boone Isaacs announce the Academy Awards nominees for best actor in a leading role at the 87th Academy Awards nomination ceremony in Beverly Hills, Calif. A report to be released Wednesday, Sept. 7, 2016 by the Media, Diversity and Social Change Initiative at the University of Southern California's Annenberg School for Communication and Journalism finds little evidence of Hollywood improving in the diversity of its movie characters or directors. Photo: (Photo by Dan Steinberg/Invision/AP, File)

Despite widespread attention over diversity in the movie business, a new study finds that little is changing in Hollywood for women, minorities, LGBT people and others who continue to find themselves on the outside of an industry where researchers say inequality is “the norm.”

A report to be released Wednesday by the Media, Diversity and Social Change Initiative at the University of Southern California’s Annenberg School for Communication and Journalism offers a stark portrait of Hollywood’s feeble to nonexistent progress in eradicating what researchers call “pervasive and systematic” problems in inclusiveness in front of and behind the camera.

Since 2007, USC has analyzed the demographic makeup of the actors, directors, writers and more from each year’s 100 most popular films. Its latest addition adds data from 2015’s top films, but finds little change.

For example, 31.4 percent of speaking characters in the analyzed films were female in 2015 — roughly the same number as in 2007. That’s a ratio of 2.2 men for every single woman.

Characters identified as lesbian, gay or transgender accounted for less than 1 percent of all speaking parts, or 32 out of 4,370 characters studied. That was a slight increase from 19 portrayals in 2014. After finding zero transgender characters in 2014, researchers could pinpoint one in 2015.

Off screen, of the 107 directors of 2015 films, four were black or African American and six were Asian or Asian American. Just eight were women, still the most since 2008.

“We’re seeing entrenched inequality,” Stacy L. Smith, a USC professor and the study’s lead author, said in an interview. “Whether we’re studying gender, race, ethnicity, LGBT or characters with disabilities, we’re really seeing exclusionary forces leaving out anybody that’s not a straight, white, able-bodied man. Despite all the chatter and all the activism and all the press attention, it’s another year where the status quo has been maintained.”

USC researchers stressed that the study’s results didn’t just offer a portrait of inequality, but captured the invisibility of many from American popular cinema. Hollywood, the study concludes, is “an epicenter of cultural inequality.”

Issues of exclusion and gender gaps have gained more attention in recent years following two straight seasons of all-white acting nominees at the Oscars and leaked studio emails from Sony Pictures that suggested evidence of disparity in salaries between male and female stars.

The fallout has led the Academy of Motion Pictures Arts and Sciences to diversity its membership. Some have individually taken action; TV producer Ryan Murphy in February launched a foundation to diversify the directors of his shows. Last month, even Michelle Obama spoke of the importance “for the world to see different images of each other.”

But the USC researchers say not enough is being done by the upper echelons of the movie industry. Earlier this year, the researchers scored 10 major media companies on their diversity record across mediums. None passed.

“We’ve seen a lot of talk and little action,” says Smith. “What we need now is for companies to take the same leadership position, be transparent in their inclusion goals and be accountable to representing the actual world we live in when it comes to the demography of the U.S.”