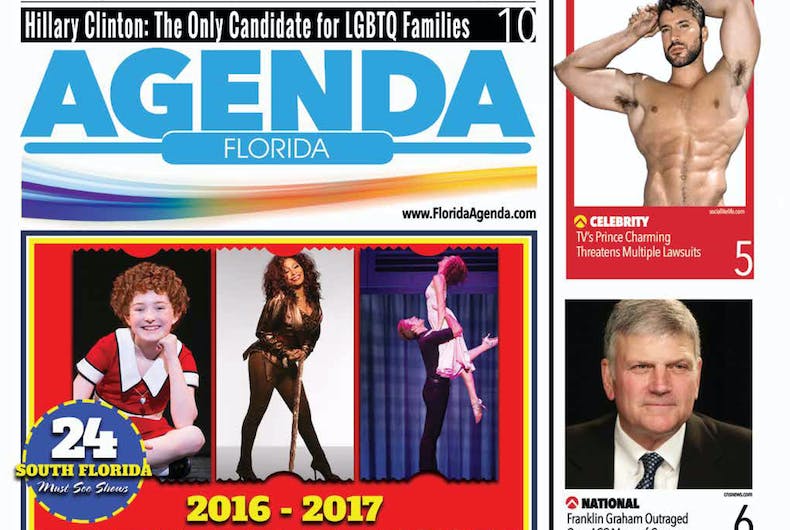 Bobby Blair’s dream to build an international media enterprise has apparently come crashing to a halt this week.

The staff of Multimedia Platforms, which includes the Florida Agenda and Next Magazine in New York, has been let go, and there will be no print editions this week. Frontiers Magazine in LA, purchased by MMPW last year, is also impacted.

Yesterday, the local publisher of the Agenda, Richard Hack acknowledged the news. Other staffers were told by Bobby Blair, the founder and CEO of MMPW, that the company was in ‘suspension.’

As news leaked out, Blair himself issued a brief press release indicating that a court order had been issued seizing the assets of his company, and a restraining order “has been issued prohibiting the company from distributing any cash or any other assets of the company.” Lenders in the State of Massachusetts apparently filed the action.

In an effort to explain the company’s present difficulties, Blair told South Florida Gay News “for the record, I was re-appointed CEO last week as I became informed all this was happening by management. The last 4 months I have not been involved or included in any day-to-day business or involved in this now disputed credit facility.”

Blair indicated in private emails to colleagues, which are being circulated in social media, that he has retained counsel to “fight” the seizure but has refused, as of this time, to name the lawyers or the court where the action is proceeding. His representation to one party was that “new management signed a horrible deal that I have now to fix.”

But for now all local and national operations have been shut down. There will be no papers or magazines this week.

According to the company’s last SEC-8 quarterly filing, MMPW had received another infusion of capital in July in excess of one million dollars. But at that time Blair was removed as CEO, and named Chairman of the Board.

However, within 60 days, the new investment team pulled out.

On Sept. 8, Peter Frank was removed from his position as a member of the board of directors and his role as Chief Financial Officer of the Company to Senior Vice President of Finance and Strategic Development. On Sept. 13, Mark Friedman resigned from the board. On Sept. 16, Robert Weiss resigned as Chief Executive Officer, President and a member of the board. On the same date, C. Lawrence Rutstein resigned from the board as well.

With the new operatives gone, MMPW reverted back to Blair’s control in the past two weeks. Then he and MMPW were the target of a lawsuit and apparently, as a result of the same, Blair acknowledged today a Massachusetts court froze all his remaining cash and assets, which led to his notice that the paper would not be publishing this week, and the employees had been let go.

It would appear that a credit and loan agreement consummated in July has fallen apart and led to the litigation. MMPW borrowed the money this past summer to stay afloat.

Earlier in the year, MMPW had secured “bridge notes” to overcome financial hurdles, and was trying to promote its over the counter penny stock. However, that revenue source collapsed as well, trading earlier this week at less than one half of one cent. Even a few months ago, it was precarious, moving from 3 to 4 cents a share.

Many local businessmen who invested in MMPW are holding shares of these stocks, including Alan Beck, whose sale of Fun Maps was secured with MMPW’s public offerings.

Frontiers was recently in the news for firing veteran lesbian reporter Karen Ocamb and implying she was too old to do the job. Ocamb was recovering from multiple knee surgeries when she was called in to the office to be fired.