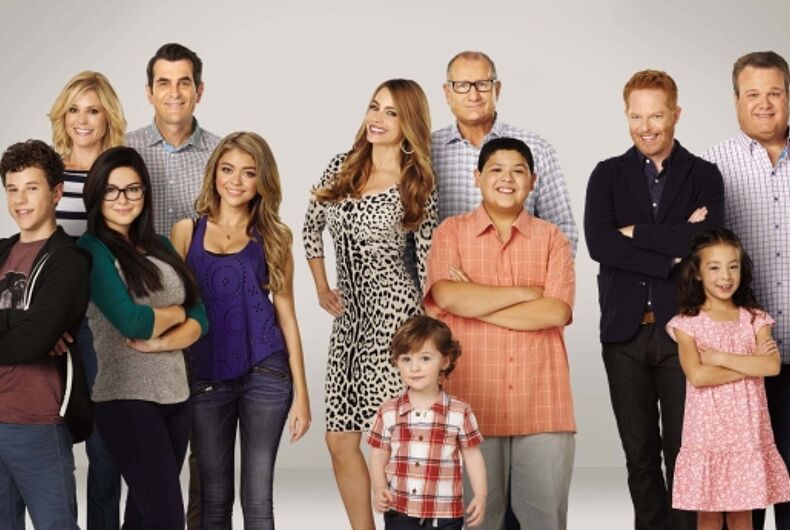 Leave it to the folks who bring us ABC’s Modern Family to tackle one of the most controversial family issues of our day: the rights of transgender children. In tonight’s episode, Cam and Mitchell’s daughter, Lily, meets a boy at school who is transgender, and the producers at 20th Century Television have provided us with this clip that you’re seeing first and exclusively on LGBTQ Nation.

The character of Tom, played by transgender 8-year-old actor, Jackson Millarker of Georgia, is invited by Lily to her house for a playdate. Of course, the out and proud gay couple pride themselves as having raised a loving and accepting child.

But as NewNowNext reported, there is the typical sitcom misunderstanding and the couple gets the mistaken impression that Lily may not be so open-minded. Cam and Mitchell overreact when they hear Lily insult Tom.

Heavy.com reported that director Ryan Case introduced Millarker to the world via Instagram:

“This is Jackson Millarker. He’s 8 years old, from Atlanta, and just happens to be transgender. He plays Lily’s friend Tom in this week’s Modern Family and he’s wonderful. One of the many reasons I love being a part of this show.”

Shortly after the story went viral, Case switched her Instagram profile to private. Jesse Tyler Ferguson, who is out and plays Mitchell, tweeted that he was “super proud” of tonight’s episode.

Millarker has two moms, one of whom reportedly got him his big break via a now-deleted Go Fund Me page. The page was titled, “Donate money to help fund Jackson’s acting career!” and raised $452, more than twice the original goal of $200. Stacey Millarker wrote that Jackson’s grandparents were among the donors, as Heavy.com reported.

In response to a question as to whether there had been any backlash from anti-transgender forces, a spokeswoman for ABC emailed LGBTQNation to say there was “no controversy.”

“A Stereotypical Day” airs tonight at 9/8c on ABC.