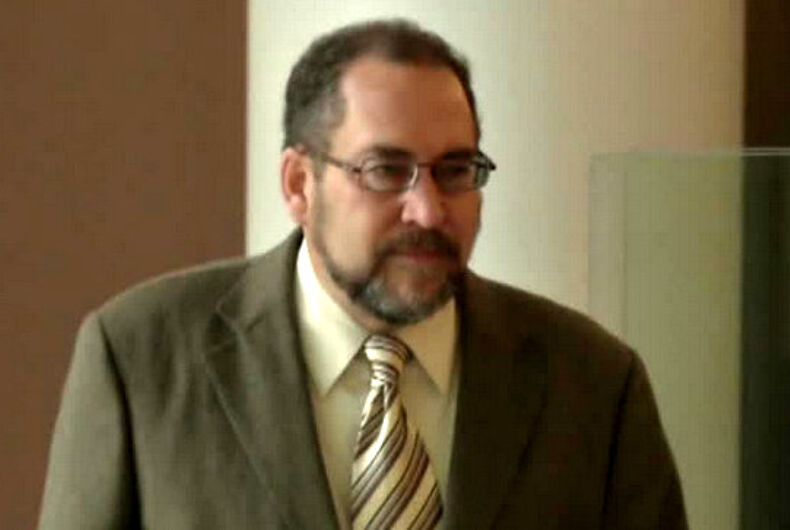 BUFFALO, N.Y. (AP) — A Virginia businessman was being kind, not condemning homosexuality, when he helped a mother move her daughter out of the country and away from her ex-partner, his lawyer said Wednesday at the start of the man’s parental kidnapping trial.

Attorney Robert Hemley denied that Philip Zodhiates, of Waynseboro, was trying to obstruct the other woman’s parental rights, telling jurors he may not even have known what those rights were, when he drove Lisa Miller and 7-year-old Isabella Miller-Jenkins to the Canadian border in 2009, after Miller had renounced her homosexuality.

Miller and the girl crossed over the Rainbow Bridge in Niagara Falls and flew out of Toronto to Nicaragua, prosecutors said, where they have remained since.

Prosecutors said Zodhiates, owner of a direct mail business that serves conservative Christian groups, helped orchestrate Miller’s move when it became clear she was losing a yearslong custody battle to Janet Jenkins, with whom she’d entered a civil union in Vermont in 2000.

After the two split up, Miller became an evangelical Christian and defied court orders granting Jenkins visitation with Isabella, prosecutor Paul Van De Graaf said during his opening statement. Miller, who gave birth to Isabella, left the country with her shortly before a court shifted custody to Jenkins.

Zodhiates, the prosecutor said, enlisted the help of a number of Mennonites in the United States and Nicaragua in arranging Miller’s trip and a place to stay when she arrived in the Central American nation.

“We’re here because the defendant intentionally acted to ensure that Lisa Miller and Isabella would get out of the country in order that Isabella would not have contact with Janet Jenkins,” Van De Graaf said as several members of the Mennonite community watched from the courtroom gallery.

Hemley called the discussion about homosexuality “a smokescreen.”

“This case is not about attitudes about lesbians or gays or same-sex marriage,” he said. “When someone asks for help, (Zodhiates) helps without regard to sexual orientation, without regard to religion or creed.”

Zodhiates has pleaded not guilty to federal charges of international parental kidnapping and conspiracy.

Miller has been charged with similar offenses but has not been arrested. Isabella is now 14.

One of the Mennonites, Kenneth Miller, of Stuarts Draft, Virginia, who is not related to Lisa Miller, was convicted in 2012 in Vermont of arranging the flight of Lisa Miller and Isabella. He is serving a 27-month prison sentence.

Hillary Clinton’s appearance on ‘Between Two Ferns’ is awkwardly delicious