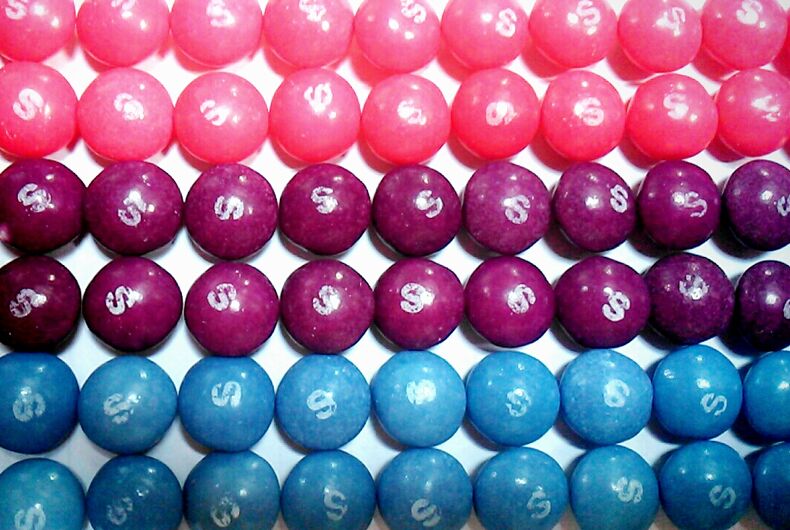 Sometimes we LGBTQ+ people can get a bit zealous in our efforts to prove we’re just like everyone else. The standard reply to the Gay Agenda: “I pay my taxes! I do my laundry! I shop at the grocery store! See? Just like you!” And that’s true, every word of it (at least for those of us who do those things). It’s also not true.

I didn’t come out as bisexual until I was in my mid-thirties. Afterward, I can recall the exact moment I allowed myself to find another woman attractive. It was literally in the grocery store, like some cliché. The cashier flirted with me, and I had an overwhelming urge to look over my shoulder and see if she meant someone else. It was fun and freeing, and it didn’t need to mean I was about to hop on a bus to New York and leave my husband and kids.

The truth is, in my everyday life, I might not wake up thinking, “It’s gonna be a fabulous bisexual day today!” Mostly, I do pretty average things. I make breakfast, send my kids to school, and settle in to work. I’m an author and freelance editor, so my days are spent dealing with words more than with people. When I’m through, I drive my kids to activities, have dinner with my family, and go to rehearsals for the church choir or my community orchestra.

Yet even though it might not be on my brain 24/7, being bisexual does affect my life, spreading its tendrils like a growing tree. I work out my complex feelings and my identity through my fictional characters, which means that during my working hours, bisexuality is at the forefront. Since nearly everyone in my life knows I’m a writer, I’ve never seen the need to hide my pen name or my sexuality. I don’t tend to come out in big announcements; people generally discover it through less dramatic means.

Some of those ways are more amusing than others. The time I tried to tell a group of Drama Mamas (parents of drama club kids) that I write queer lit? Didn’t go over so well. The mom who had her pen out, ready to write my author name and book titles, stuffed them back in her purse and changed the subject faster than light speed.

There was also the time my pastor requested a coffee date to “chat.” Since those have never gone well for me, I was prepared for a discussion on how I could remove the sin from my life. Intellectually, I knew that wouldn’t happen with this pastor, but it’s been an issue before. Instead, she was interested in asking me to help her understand some LGBTQ+ terms which were new to her as a result of reading my social media.

Being out-and-proud sometimes has these funny, awkward, and sweet moments, but I’d be lying if I didn’t say it has its dark side. It has the men who send me sexually explicit private messages, the people of various genders asking my availability and whether I’d want a threesome, and the cars full of people shouting slurs at me while I walk my dog. My primary work is online, so I’ve also had my share of threats and insults from people who think I’m either a poser or a liar or just plain gross. I left a book launch party in tears because a group of lesbians said the most hateful, bizarre things to me which not even one of my offline lesbian friends would ever even think, let alone say to my face. One of them sent me personal messages for hours demanding an explanation of my sexual history and wondering how someone like me could exist.

None of those are all the time, everyday events, fortunately. So what does being bisexual look like on an average day? It looks like being a Fierce Mama Bear and protecting my kids’ sexual and gender identities. It means quietly telling my kids’ friends that my house is safe space. It’s dinner conversations about social justice, intersectionality, and body- and sex-positivity. It involves unconditional love and acceptance of all the people who come in and out of our lives. It’s being fully part of the bigger LGBTQ+ community, carefully watching my words so that I’m living out the inclusion I so desperately want for myself.

In a sense, we’re not all that different. Most of us are simply going about our lives, doing our best to be good to one another. And yet, there’s something unique about existing in those spaces between. Sometimes, I think being bisexual is like those optical illusions where you see an old woman or a young woman, faces or vases, a duck or a bunny. People perceive in me what they want to see: a suburban “straight” WifeMommy with two kids and a PuppyCat or a ferocious Queer Warrior with a pen. Which am I? I’ve always been good at seeing—and being—both, and I wouldn’t have it any other way.

Amy Leibowitz Mitchell is an author of LGBTQ+ fiction and freelance editor falling somewhere on the Geek-Nerd Spectrum. They live in western New York State with their family. You can find more at their blog or on Twitter, @amyunchained.