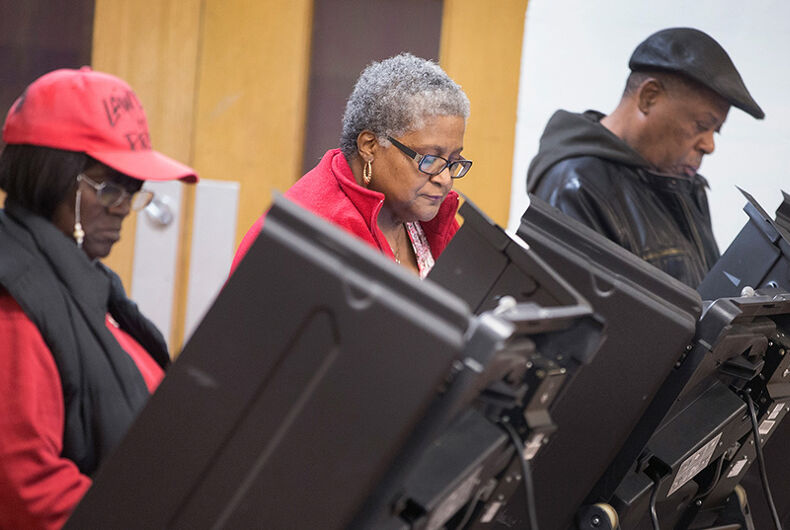 African-American voters go to the polls in Ferguson, Missouri in 2015.

Black votes matter! So, too, the black lives many politicians pander to in order to get them.

However, exploiting cultural markers – like Republican presidential hopeful Donald Trump did by reading a scripted text in a black church or like Democratic presidential hopeful Hillary R. Clinton did by giving a shout-out on an a.m. urban radio show stating she, too, always carries hot sauce around with her – not only infuriates most African-Americans, it also insults the political intelligence both politicians obviously think we don’t have.

The stereotyped black church stands front and center for many white politicians looking to woo, if not win, our votes. The perception that all a white politician needs to do is merely show up the Sunday before election day is not only a hackneyed campaign strategy in 2016, but it’s also a clear indication that this politician has nary a clue nor a sincere concern for the parishioners he stands before.

When Donald Trump spoke at a megachurch in Detroit with native son Dr. Ben Carson in tow it provided a good optic for a brash candidate whose pitch to us a week before at a predominately white rally was remarkably unfiltered and unapologetic.

“You live in your poverty, your schools are no good, you have no jobs, 58 percent of your youth is unemployed. What the hell do you have to lose?” the candidate asked the crowd.

While Hillary Clinton’s more measured steps toward the African-American community don’t paint us as an urban blighted monolith, her past actions — creation of the 1996 “super predator” myth to depict black youths caught up in her spouse’s crime bill that precipitated mass incarceration and is still felt today – makes her appeal, especially to African-American millennials, dead on arrival.

“What am I supposed to do if I don’t like him and I don’t trust her?” a millennial black woman in Ohio asked. “Choose between being stabbed and being shot? No way!”

Adding insult to injury when it comes to African-Americans troubled relationship with this country’s penal system, Clinton acknowledges the too frequent and discriminatory use of the death penalty, but she doesn’t want it abolished.

“I think there are certain egregious cases that still deserve the consideration of the death penalty, but I’d like to see those be very limited and rare,” she said.

Clinton, a former attorney, knows that many poor people spend countless years in jail for a crime they did not commit because of ineffective counseling and poor legal representation. And the presumption that African-Americans and Latinos are more culpable of a crime because of the color of their skin makes her campaign pitch to Black Lives Matter activists – where prison reform is a key tenet of their platform – ring hollow.

These ongoing tactics along with candidates, like both Trump and Clinton, who pop-up in perceived and stereotypical black spaces will catch a few of us swimming upstream. But they would do enormously better pitching a consistent campaign message that’s heard at every one of their pit stops rather than giving African-American voters a wink with a tepid appearance at a black church or “sistah” shout-out about toting hot sauce.

Barbra Streisand roasts Trump with parody of ‘Send In The Clowns’